The Echoes That Remain 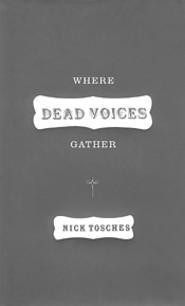 A restless, fastidious reporter, Nick Tosches is a distinctive chronicler of American mongrel music. His goal is complex and philosophical, be the topic Jerry Lee Lewis, Dean Martin, or Emmett Miller, the subject of his latest book. Tosches is out to make sense of history -- without stripping it of its mystery.

"True history seeks, it does not answer; for the deeper we seek, the deeper we descend from knowledge to mystery, which is the only place where wisdom abides," he writes toward the end of Where Dead Voices Gather, a biography that also serves as an excavation of American minstrelsy. The fourth of Tosches's books to explore American musical vernacular, Dead Voices follows Country: The Biggest Music in America; Hellfire, his stunning biography of Jerry Lee Lewis; and Dino: Living High in the Dirty Business of Dreams, his even more thorough biography of Dean Martin. Dead Voices, too, is about the tension between aspiration and execution and about how pop stars fall in love with their self-fabrications and often wind up victims of their own brilliance and singularity.

Tosches's fixation here is Miller, a figure of early country music and jazz, who was born in Macon, Georgia in 1900 and died there 62 years later. Tosches's obsessive probe of the shadowy singer-entertainer (a Columbia/Legacy recording of key work has just been reissued) led him to examine the big picture of American popular music. Tosches shows how Miller influenced Hank Williams, George Jones, Jerry Lee Lewis, and Bob Dylan. The line he traces extends to contemporary groups such as Detroit's White Stripes and Memphis's North Mississippi Allstars, who, like their precursors, milk the confluence of Highway 61 and the Mississippi River for myth.

Miller's relationship with Jimmie Rodgers, the "singing brakeman" whose wild yodel at times resembles his, remains unresolved and especially tantalizing in Tosches's telling -- perhaps on purpose. "In the end, Rodgers's fame and fortune flowered with unimagined abundance, as the wisp of Emmett Miller's brief moment in the sun faded to nothing," Tosches writes. "Rodgers died young, and Miller lived on nearly 30 years more, the one more a ghost in life than the other in death."

A "hillbilly singer and jazz singer both" with a "trick voice," Miller (whose profile was highest in the late '20s and early '30s) may have been the last gasp of minstrelsy, which dominated American music and show business from the mid-19th century until after the turn of the 20th. His was "a form of stage entertainment in which men blackened their faces, burlesqued the demeanor and behavior of Southern blacks, and performed what were presented as the songs and music of those blacks."

Tosches's inquiry into minstrelsy and its descendants and relatives -- talking blues, vaudeville, some forms of jazz, today's rap -- puts those musical forms in cultural context. He details the expropriation at the heart of American pop, tracing how Miller, Stephen Foster, and even W.C. Handy took over the music of rural blacks, gentrifying them for popular consumption.

Readers may find Tosches's off-the-subject ramblings to be a bit daunting. "America alone of nations envisioned herself in terms of a dream," Tosches writes. "Nothing in this country is real, everyone an actor. From long-tail blue to dashiki, from the organ-grinder to the godfather, it is all a masquerade. If the halcyon lark of antebellum plantation life was a sham, it was at least a sham that few took for reality. The same cannot be said of modern cultural shams such as the fantasy of African-American roots perceived in, say, Kwanzaa, a fake holiday invented in America in 1966, and no closer than minstrelsy to the reality of any true African culture."

Tosches can be challenging. He also can be dull. Why go into the branches of Miller's family tree in an unanalytical account of his last year in Macon? Why apply the same critical phrases to recent Bob Dylan and early William Faulkner? Long stretches could have been excised, like the accounts of Miller's peregrinations through Middle America's lesser cities during the Depression. He can cut, too. In a discussion of "Good Rockin' Tonight," a 1948 hit by Wynonie Harris that Elvis Presley bowdlerized in 1954, Tosches calls Presley "the great mediocrator . . . who made of the fine crude bread of rock 'n' roll a sterile and insipid Wonder Bread for the masses."

Tosches continually explores the bardic and strives for the bardic style -- not an easy task for so postmodern a writer. In connecting Carl T. Sprague's "The Dying Cowboy," Louis Armstrong's "St. James Infirmary," and Dylan's "Blind Willie McTell," he touches on his deepest concern. "And, of course, that is what all of this is -- all of this: the one song, ever changing, ever reincarnated, that speaks somehow from and to and for that which is ineffable within us and without us, that is both prayer and deliverance . . . "

Toward the end of his quest, Tosches expresses a fear that he has written a book "so bereft of commercial potential that not even I, who can skin a snake without its knowing it, can hope to con the most benighted and gullible of publishers into paying a decent dollar for it. Then again . . . " Then again, indeed. Prolix, stimulating, and proudly uncontainable, Where Dead Voices Gather resonates like the music it so deeply describes.