With Gem. Monday, March 3, at the Grog Shop. 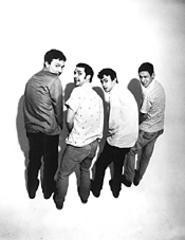 The Figgs
At a time when too many bands are channeling the more brain-dead aspects of the '70s punk movement -- safety pins, sneers, pseudo angst, et al. -- it's refreshing to have a band like the Figgs around, paying homage to the intelligent end of the scene. Energetic and scrappy, but with a melodic edge and a distinct gift for hooks, the Saratoga Springs, New York quartet has more in common with acts like the Jam, Elvis Costello, or Squeeze than it does the Sex Pistols or the Clash -- and the Figgs are all the better for it.

Over the course of five albums, including a brief (one album) major-label stint on Capitol, the Figgs have represented the poppier side of the punk-pop equation with aplomb since 1992. Their latest effort, 2002's Slow Charm (Hearbox), is no exception, full of tunes that will have fans alternately bouncing around the room and listening intently for the next clever couplet. Lend them an ear Monday at the Grog.