After opening last night’s 90-minute concert at Jacobs Pavilion at Nautica with mid-tempo rockers “Closer to Me” and “Heartbeat,” the Fray singer-pianist Isaac Slade, who, with his shaved head, looked a lot like former R.E.M. singer Michael Stipe, apparently decided the crowd of about 3,000 wasn’t properly engaged with the music. Judging by the fact that security personnel didn’t seem to anticipate his antics, he apparently called an audible and jumped off the stage and ran through the seated area on the floor of the pavilion to stand on a table where he could serenade the audience in the bleachers as he sang “All at Once.” From that point on, the audience was hooked (and Slade miraculously didn’t fall as he leap frogged across floor seats to go back to the stage). Thanks to his enthusiasm, patrons stood for the rest of the show.

The Fray Performing at Jacobs Pavilion at Nautica 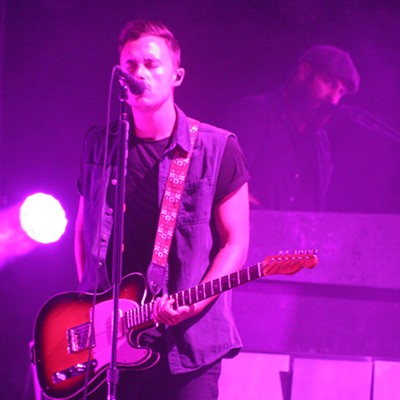 While the band made its spirituality a bit too obvious in “Just a Closer Walk with Thee,” a song that found Slade and guitarist Joe King sharing lead vocal duties with Brian Fennell of the opening act Barcelona, most of the songs weren’t so explicitly religious. And that was a good thing. The show’s second half really soared as the band added some heavy percussion to “Hold My Hand” and threw beach balls into the audience for the funky “Give It Away.”

The piano ballad “How to Save a Life,” the hit that propelled the band to stardom when it came out nearly a decade ago, featured a terrific sing-a-long with the audience. In fact, Slade didn’t even sing the song’s final verses; instead, he held the microphone out to the audience and let fans finish the song. It was a great moment in a set that concluded with the vigorous “Love Don’t Die,” a gritty garage blues number that’s one of the best songs on the band’s most recent album Helios. Backed by a few hired hands who added some texture to the songs, the Fray never veered too far from its Coldplay-like tendencies but had enough energy to keep the set from becoming sleepy. Slade graciously thanked fans for showing up for the past nine years that it’s made Cleveland a stop on its tours and appeared to be genuinely impressed by the crowd’s spirited response to both old and new songs.