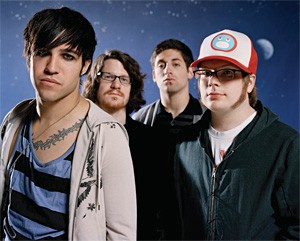 In an effort to stabilize itself by any means necessary, the music industry releases almost as many music DVDs as CDs each week. They're often no more than poorly shot concerts or compilations of videos; sometimes they're hastily assembled documentaries. And most of the time, they totally suck. Here's a look at some notable music-DVD releases from the past few months.

Fall Out Boy
Live in Phoenix
(Island)
The reigning kings of pop-punk are capable of a kick-ass live show, especially when bass player Pete Wentz and guitarist Joseph Trohman literally roll over each other. Unfortunately, they really weren't into it at this hour-long concert from last year. The Akon, Michael Jackson, and Panic at the Disco covers almost make up for the band's limp performances of breathlessly titled fan faves like "A Little Less Sixteen Candles, A Little More 'Touch Me'" and "This Ain't a Scene, It's an Arms Race."

Gossip
Gossip — Live in Liverpool
(Columbia/Music With a Twist)
Extra-large frontwoman Beth Ditto sweats up a storm — and has us hoping she doesn't keel over from a heart attack — in this live set filmed in the Beatles' hometown last year. The U.S. indie-pop trio charges through songs like "Standing in the Way of Control" that combine a little bit of soul and a whole lot of attitude. The "Careless Whisper" cover isn't nearly as goofy as you'd think.

Hip Hop Time Capsule: 1994
(MVD)
Koe Rodriguez's interviewing skills are whack, the camerawork is shoddy, and the concert performers are strictly C-list. But 1994 was the year Biggie, Nas, Snoop, and Wu-Tang made some of their best records. This look-back skims over a lot of the action in favor of the artists, who took time out of their not-so-busy lives to talk to Rodriguez. Sill, it sums up the period when hip-hop began replacing its revolutionary roots with blinged-out blah.

Robyn Hitchcock
Sex, Food, Death . . . and Insects (A&E)
British weirdo Hitchcock is a relative picture of normalcy on this hour-long doc, in which the alt-rock singer-songwriter prepares for a back-to-basics tour with pals like R.E.M.'s Peter Buck and Led Zeppelin's John Paul Jones. There's plenty of musing and music, as Hitchcock performs and discusses his work at home, onstage, and on the bus. Best of all, there are plenty of in-progress tunes that'll probably end up on his next album.

Rock of Love — The Complete First Season
(Anchor Bay)
Your first reaction to this show: What the fuck is wrong with people? Your second: Boy, that Bret Michaels sure is full of himself. Watch as the Poison frontman pits 25 surgically enhanced women against each other, as they compete for his affection and a chance to see what he's really hiding underneath that bandanna. This three-disc set includes all 13 episodes from the VH1 show's first season and enough blond, puking, and tattooed bimbos to last a lifetime.

TAD
Busted Circuits and Ringing Ears
(MVD)
These loud Seattle rockers — led by bear-like former butcher Tad Doyle — were pretty much overlooked in the early '90s, while many of their flannel-wearing neighbors mugged it up for MTV. But their combination of muddy guitars and sweltering shows influenced almost everyone who heard them, including super-fan Kurt Cobain. This documentary gathers videos, testimonials, and lots of music from an era when grunge was more than just a tidy label.

The Tomorrow Show With Tom Snyder: John, Paul, Tom & Ringo
(Shout! Factory)
Seventy-five percent of the greatest pop group ever chats (separately) with Snyder in these three outings from his late-night TV program. The first disc includes both a 1975 interview with John Lennon and a show from December 9, 1980, the night after the Beatle died. The second disc features a 1979 interview with Paul McCartney and a 1981 sit-down with Ringo Starr and his wife. All of them talk about their magical mystery days. Fab.

Zappa Plays Zappa
(Razor & Tie)
A couple of years ago, Dweezil Zappa took a band on the road to play dad Frank's music. Not an easy task, since papa Zappa's songs don't really lend themselves to interpretation. The group — including a few guys who played with Frank — certainly has the chops. But, like much of Zappa's music, this two-disc live set is needlessly complicated, self-indulgently artsy, and kinda boring.