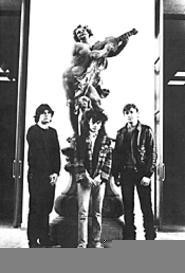 For all 726 Mice fans out there, this CD was supposed to be a Holy Grail reissue to match Brian Wilson's Smile. The Mice brought pure pop heart to a mid-'80s Cleveland underground scene that often got caught up in insular ironic ha-has. Though drunk and jokey in their own way, the Mice always seemed to have a melancholy core -- similar to their Midwest brethren the Replacements. While effortlessly kicking out crystalline hooks in the midst of teetering-on-a-train-wreck energy, they were apt to get naked and giggle away 'tween songs, making the emotional depth of their recordings stunning.

The Mice released two amazing LPs of scrappy mod pop that was sparked by the still-smoldering '77 punk explosion, but that also jangled out timeless songcraft. They were doing the whole "Gawd, they're drunk -- how the hell do they do that?!" thing long before the rise of Guided by Voices and the plethora of indie poppers who should've been influenced by them. Those 726 fans would proclaim Scooter, the Mice's 1987 master slab, the perfect pop record of the '80s. The band's end was an unexpectedly depressing saga of mental problems, culminating in singer-guitarist Bill Fox ditching the group as they packed the van for their first real tour, never to be seen again for years. Fox's subsequent late-'90s solo CDs and spinoffs the Revelers felt like leftovers to many who had seen the Mice in action.

So this long-promised CD compilation of their two records (For Almost Ever and Scooter), though appreciated, is a letdown for diehards. No extra tracks, no first 7-inch, and the holiest of holy grails -- the never-released third album -- sits in the vaults. (Admittedly, Scat had hoped to add more goodies, but some of the band members resisted. ) Half the songs here were mastered from vinyl. And the packaging, especially for the usually creative Scat, is chintzy at best. Nevertheless, this is still the most welcome reissue of the year.