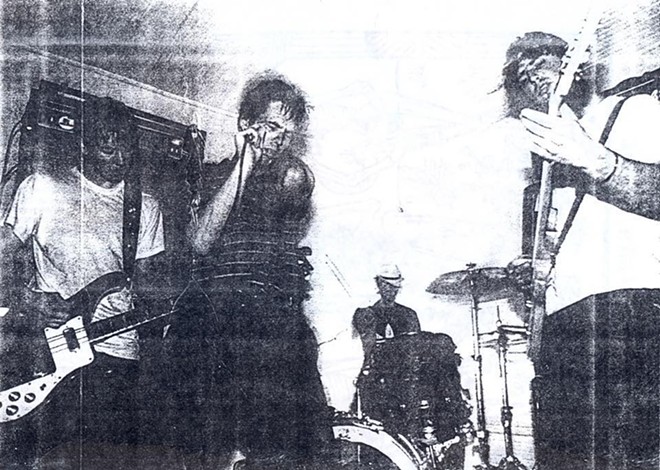 Photo courtesy Party of Helicopters
Jamie Stillman is calling from the future. He’s in Australia on a business trip, working to bring his Akron-based pedal company, EarthQuaker Devices to the folks Down Under, and it’s Saturday afternoon there when he calls Scene Friday night.

An airport customs agent is now yelling at him to get off the phone, but he wants to talk about his old indie rock band the Party of Helicopters and their reunion show. It’s their first in three years, and he’s excited. All of the band members are playing, including the group’s two drummers.

“Every couple years, someone asks us to play and that’s all it takes,” the guitarist says. “We’re not hard to convince.”

And that’s what Square Records owner Dave Ignizio did for his Akron shop’s 15th anniversary show, going down Saturday at Musica. Wanting to bring back the bill of bands from the first show he ever booked after starting his record shop, he tracked down the guys from Kent's own the Party of Helicopters, which broke up in 2004 when many rock critics and (now nostalgic) fans deemed it just on the cusp of stardom.

“I don’t think they even remember playing the show,” Ignizio says. “But it was a huge deal for me as it was the first show I booked.”

When asked if he remembers, Stillman pussyfoots around saying he does, only to admit defeat. “I do remember when the record shop opened though. That was a huge deal in Akron,” he says.

Stillman explains that the shows he does remember are the weird ones — like the one in a Baton Rouge bayou with an opening puppet act, or the time they played in a trailer park. He says that after traveling the country with his band for years, gigs start to swirl together.

“We were always broke,” the 41-year-old recalls. “But it was fun, and it was goofy all the time. The world was different; the internet was new. We were traveling around with an atlas trying to find places. It was hard to get things done, and I think we were pretty successful that way.”

Stillman, who is also a former Black Keys tour manager, started his pedal company the year his group officially called it quits in 2004. Since then, the band members have gone their separate ways, mostly staying in the Kent and Akron area with the exception of drummer Cory Race who moved to New York. Many have continued making music, including Stillman and POH singer Joe Dennis, who play in the band Fringe Candidate together.

“We’re all older and fatter,” Stillman says with a laugh.

Known for their riotous progressive rock instrumentation, dreamy vocals and honest lyrics (including a song about a mustache), they're back for a one-night-only show where original fans and the uninitiated alike are invited to relive the happier and care-free times of their adolescence.

Getting back together also reminds Stillman they have one whole Party of Helicopters album’s worth of material that still needs to be recorded. And he’s hoping this time they’ll get in a studio and hammer down the tracks.
click to enlarge

“Every time we do these shows, that’s the other thing we remember, that we need to make that record. I’m excited for that to happen,” he says. “Somehow, it’s hard to get it done. We’re all still in contact, but it just never comes up.”

Stillman says the labels that released their last two records, Space ... and How Sweet it Was and Please Believe It, no longer exist (nor do many of the music venues they played at back in the late ’90s and early aughts). Getting that last record out would cement the band’s legacy.

Reflecting on the final days of the POH run, Stillman says, they still weren’t famous. But that wasn’t the deciding factor in why the four-piece called it a day. “Near the end people were sick of seeing us,” he says. “When people stop showing up all the time, they’re kind of telling you that.”

Yet, like every reunion show the crew has done in the past, Stillman says he’s hearing good feedback and at least some friends and family are expected to attend. The band even has time for a few rehearsals before the show this week.