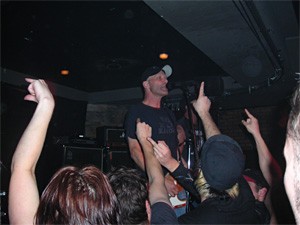 The Queers, totally gay for one-finger salutes at Peabody's.

What the Queers are: a long-running, Ramones-inspired band that, along with the Descendents, pretty much wrote the book on pop punk. What the Queers aren't: gay (not that there's anything wrong with that, but they're often confused with onetime labelmates and queercore pioneers Pansy Division). Actually, the Queers have been accused of homophobia, mostly because of songs like "Junk Freak" ("We're not as famous as the Pixies or the Bags/Hey, we may be the Queers, but we ain't no fags") and "Gay Boy" ("He's a gay boy, boy toy, jerk-off, a fuck-up"). In the liner notes to the 1993 reissue of the band's self-released 1990 debut, Grow Up, frontman Joe Queer writes, "We know some of these lyrics are pretty insensitive, but we didn't write these songs to hurt anybody's feelings."

Indeed, being obnoxious, stupid, and insensitive — albeit in a relatively innocent, good-natured way — has been the Queers' calling card since 1982, when singer-guitarist Joe Queer (born Joe King) formed the original trio in New Hampshire. That attitude has made them living legends of the punk scene — a reputation that's bolstered by their refusal to play the Warped Tour or similar "sellout" gigs (yes, that sorta idealism still impresses purists). Lots of guys have been Queers over the past quarter-century; Joe remains the only original member in the latest four-man lineup. Musically, things have changed too: Last year's Munki Brain sports a power-pop richness that suggests the band has at last grown up. But that notion will probably be dashed onstage, once the Queers launch into older nuggets like "Ursula Finally Has Tits," "Teenage Bonehead," and "I Can't Stop Farting."