The Tragically Hip Delivers Mesmerizing Show at House of Blues

Send a News Tip
Since forming in Canada some 30 years, the Tragically Hip have regularly included Cleveland as a tour stop. The band played here before it got big in Canada and continued to play here even after it got big, turning the intimate club shows it played in town into real treats for Canadian fans who would usually just get to see the group when it played at the country’s big sports arenas. Last night at a sold out House of Blues, plenty of Canadians were in attendance (you could tell by the number of hockey jerseys that fans wore) and the band put on a mesmerizing show, playing its 1992 album Fully Completely in its entirety and offering up a handful of hits to bookend the performance of the entire album.

16 Photos of the Tragically Hip Performing at House of Blues 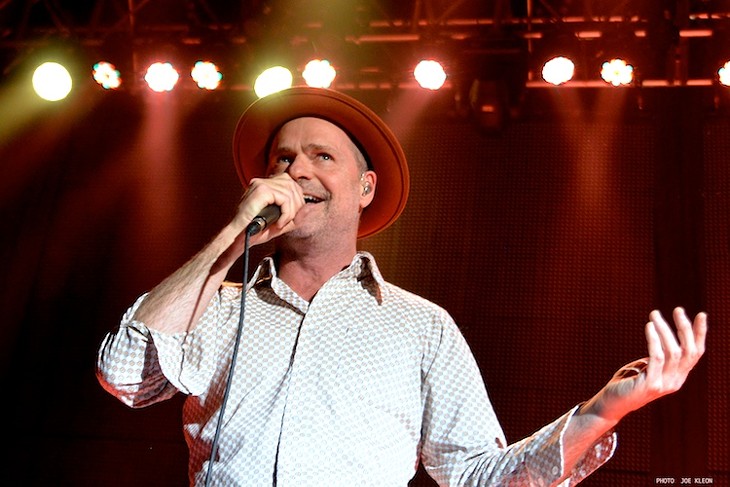 Wearing a black leather jacket and matching black leather pants, singer Gordon Downie practically moonwalked his way across the stage during the opening number, “Grace Too.” Using a white handkerchief as a prop, he wiped down the mic stand and dangled the thing in the air as if he expected a dove to magically appear. It was a sign that the singer was in a particularly playful mood and throughout the night he would regularly pantomime and dance as if he was some kind of intense vaudeville performer.

As soon as the band launched into “Courage,” Fully Completely's rousing opening number, audience members began singing the lyrics in unison. “Looking for a Place to Happen” delivered a great blues guitar riff and “Lionized,” one of many highlights in the two-hour set, started with a bit of hi-hat and then gave way to a nasty guitar riff. Downie’s sneering vocals had a real urgency to them too. “Fully Completely” found Downie extending his arms upward as if he was some kind of possessed preacher. To the crowd’s delight, he virtually shouted the song’s refrain. After playing the album in its entirety, the band left the stage for a minute and then returned for an encore that included hits such as “New Orleans is Sinking” and “Little Bones,” the latter of which was played with such ferocity that it bordered on metal.

In this day and age, it’s not often you can find bands that have been together for 30 years and still sound sharp. Though the Hip’s most recent albums haven’t resonated as deeply as Fully Completely, the group still puts on a hell of a live show. Here’s to hoping they keep revisiting their back catalog and continue to include Cleveland as a tour stop.