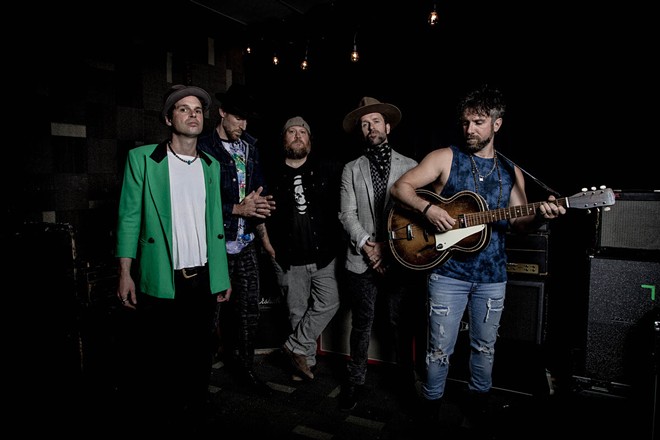 David Basted
The Trews.
Back in 2019, the Trews had started recording what would become their latest album, Wanderer, with Rich Robinson of Black Crowes fame at a Nashville studio. The pandemic hit, and the rock group had to head back to its Hamilton, Canada home after cutting only three tracks.

“[The pandemic] totally exploded all our plans for that album,” says guitarist John-Angus MacDonald in a recent phone interview from his Hamilton home. The Trews perform on Tuesday, Jan. 31, at House of Blues. “Rich Robinson is an old friend of the band, and we were excited that we had finally gotten it together to make a record with him. The label was fired up about the songs we had made. We made plans to go back in March of 2020. That never came to pass. We thought we would wait the pandemic out for a few months. But then, we had to make other plans.”

Instead of continuing with Robinson, the group worked with Canadian producers Derek Hoffman and Eric Ratz to complete the album.

“Most things from that point forward — mixing, overdubbing and artwork — had to be done remotely,” says MacDonald. “It was just a totally different experience for us. We normally try to finish in a month or so. This was spread out over a year-and-a-half. I can tell the difference between the sessions, but the thing that ties it together is that we did it live off the floor. It’s the same five guys playing live. The producer changes, and some of the tones change. That was sort of in reaction to our previous record, which was much more of a studio album.”

The band references the pandemic in the catchy, country rock-ish “I Wanna Play,” but even with the specific reference, it’s an anthemic song it could still play for years to come.

“I think saying the word 'pandemic' in it might date it a bit, but the chorus is so anthemic” he says. “It’s become by far the biggest hit off the record. It’s just a love song disguised as a song about the pandemic. I guess [the industry shutdown was] a silver lining because that song would never have been written. The pandemic did buy us more time. You don’t always need more time, but you’re never 100 percent confident in all of the songs.”

The narrative in “Lonely in the City” stems from singer Colin MacDonald’s stream-of-consciousness writing that he does in journals, and “Hidden Gem,” another highlight, benefits from three acoustic guitars that give it a certain twang. The latter is a song that Robinson produced and plays on.

“The album really packs a punch,” says MacDonald. "The songs are very high-energy and high-impact songs. One thing we did notice is that when we got the material out on stage, it had a great energy to it.”

The band dates back to the late ’90s, and when the group formed in Nova Scotia it went against the city’s musical grain at the time.

“The ’90s in Nova Scotia was like the hangover from grunge,” says MacDonald. “We were in our teens. We were high school kids. We started the band and like Spinal Tap drummers, we’ve had half a dozen drummers. Halifax was like Seattle East. That had started about five years before we started our band. I don’t think we particularly fit in that scene, and that’s one of the reasons we split and went to central Canada near Toronto. We had more of a shot up here. From the touring perspective, we did everything and anything that came our way. Canada is a crazy place to tour. It’s so big. The hub of it is Toronto. One-third of the population is in and around Toronto. Once we moved, we could take advantage of every opportunity.”

Early on, one of the bigger moments in the band’s career came when its 2004 single, "Not Ready To Go," took off, and the band got an offer to open for the Tragically Hip in front of 30,000 people.

“That was an arrival,” says MacDonald. “They were the band that paved the way. They showed you could become a Canadian legend just by being in Canada. We looked up to them in so many ways. That led to a friendship and to this day, we still know those guys really well.”

After 25 years, MacDonald says the band’s constantly honing its skills.

“I think we have gotten much better I hope as players and performers and writers,” he says. “Writing is tough. We feel like we’re improving, and our process is more refined. People will still come up to you and say your best song is what you wrote 20 years ago. You can’t really control that, but I feel like we have gotten better at doing it the way we do it.”
Coming soon: Cleveland Scene Daily newsletter. We’ll send you a handful of interesting Cleveland stories every morning. Subscribe now to not miss a thing. Follow us: Google News | NewsBreak | Instagram | Facebook | Twitter