The War on Drugs Subsumes The Agora With Massive, Unrelenting American Rock 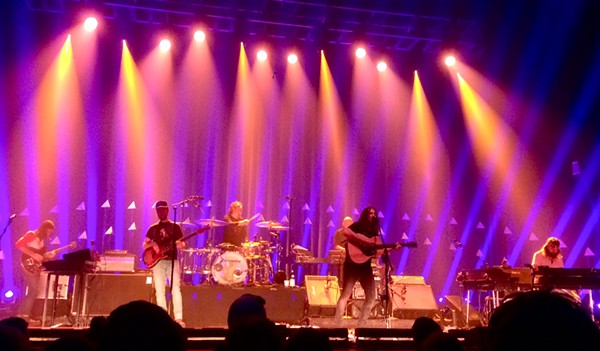 ERIC SANDY
The brass sealed the deal for me. For my money, Jon Natchez's droning ambience on sax took most of last night's set from The War on Drugs to another level of heavy, all-encompassing American rock. Never overdone, it was properly placed in the context of each tune, each jam.

That's essentially how the band works as a whole. Adam Granduciel's delicate compositions are built on a fine layering technique. In the live setting, the band replicates it beautifully.

Last night's show at the Agora was perhaps my favorite of the War on Drugs shows I've seen in Cleveland, if only because the room fit the sound. It's something I've written about before; finally, I thought, the band could swallow an entire room, high ceilings and all, and realize itself completely.

(Of course, some guy in the bathroom late in the set insisted that the sound was "dogshit," and maybe that was the case toward the back? Up front, the band sounded great. A lot of the work that's gone into the Agora in recent years has really paid off. It's noticeable in both the sound and the overall booking.)

Anyway. Last night's show was great. Although, it's not like the band is breaking any terribly new ground, really, what with 2017's A Deeper Understanding still feeling like it came out just last week. This wasn't an album-promotion tour, per se, but it could have been. Is that a problem? Not really.

Featuring a top-heavy setlist (according to my sensibilities) the band led off with a bevy of outsized jam pieces: "Pain," "An Ocean In Between The Waves," "Strangest Thing" — all tremendous in their own unique ways and all pushed into fine guitar-shreddage territory by Granduciel. "Strangest Thing" was dedicated to the guys from Pizza Joe's in Youngstown. ("No mice on your slice!" was a splendid little moment of levity from a relatively chatty Granduciel early in the night.)

From there, and throughout the set, the band toggled between raging walls of sound and somewhat calmer, more Americana-laced songs, like "Arms Like Boulders" and "Eyes to the Wind."

All in all, this was a great mid-summer show. The crowd was in fine form, which feels like an all-too-rare sentiment at most shows these days. There was little in the way of over-the-top talking up front in the pit, and isn't it nice when that's the case?