There Will Be Blood tops this week’s pop-culture picks 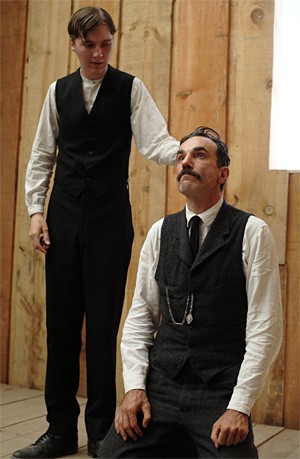 There will be wood paneling as well as blood.

TOP PICK — There Will Be Blood: 2-Disc Collector's Edition
(Paramount)
Paul Thomas Anderson's sprawling epic about a turn-of-the-century tycoon — played by a tightly wound Daniel Day-Lewis — who likes oil, booze, and milkshakes was one of last year's best movies. This two-DVD set piles on the extras (leftovers, behind-the-scenes features, and a silent film about the oil biz), making it one of this year's best DVDs.

DVD — The BBC Natural History Collection Featuring Planet Earth
(BBC)
Just in time for Earth Day on Tuesday, this mammoth 17-disc box set compiles four award-winning documentaries, including The Blue Planet and The Life of Mammals. The centerpiece — spotlighted in the collection's title — is the mind-blowing Planet Earth, a look at our world from the perspective of the various creatures, big and small, who live here. A bunch of extras round out this massive and winning box.

CD — Kelis: The Hits
(Jive/Star Trak/Legacy)
Nas' wifey is best known for the boobalicious "Milkshake." But this 14-song compilation shows her to be the weirdest R&B female singer this side of Macy Gray. Her first single, "Caught Out There," featured a literally screaming chorus of "I hate you so much right now!" Her duet with Ol' Dirty Bastard, "Got Your Money," may or may not be about getting paid. And 2006's "Bossy" should've been a bigger hit.

VIDEO GAME — Turning Point: Fall of Liberty
(Codemasters)
The premise is chilling: What if Winston Churchill had died in 1931 and wasn't around to spark the Allied forces against the Nazis? Flash forward to 1953, when the Germans prepare to invade the U.S. This shooter (for the Xbox 360, PlayStation 3, and PC) plays a lot like other WWII games, but the foreign setting — we can't think of any other war game that takes place on American soil — gives it a fresh spin.