The chirpy Swedes in the Sounds mine the Me Decade with synths and sneers.

Send a News Tip
The Sounds 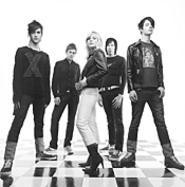 Sounds singer Maja Ivarsson is kind of like a more debauched Debbie Harry.
The cultural amnesia inherent in today's '80s revival should amuse anyone who survived the Reagan years. Jelly bracelets, off-the-shoulder shirts, and scads of hot pink clog contemporary clothing stores, conveniently neglecting the era's fashion faux pas -- stirrup pants, XXL shirts, and Day-Glo patterns. Asymmetrical haircuts today lack the heavenward hair spray or poof factor perfected by A Flock of Seagulls. Pretty young things such as Hot Hot Heat, IMA Robot, and No Doubt represent the dazzling, cutting-edge portion of the era, blithely ignorant of the poodle metalers and diva weepers who really populated the Top 40 back then.

But between fashion merchandisers carefully replicating the trends of yesteryear and radio bean-counters watching chart positions like hawks, maintaining the revival is no ironic lark. Constructing a retro pose is serious business these days -- one that completely contradicts the entire facade of innocence conjured by all the neon colors and electronic grooves of the '80s.

In fact, the synthesizer-happy Swedes in the Sounds make up one of the few backward-sounding bands that perpetuates the music without any real agenda. The evidence? Just chat with three members of the band -- guitarist Felix Rodriguez, bassist Johan Bengtsson, and keyboardist Jesper Anderberg, talking via speaker phone from New York City, all nursing hangovers -- about what they listened to growing up.

"Europe!" a few voices chime in.

"The fiiiinal countdown . . ." a Swede sings in the background.

"I don't know what we used to listen to when we were teenagers," Rodriguez muses. "Some, like, cheesy music -- Roxette, that kind of cheesy. Have you heard Europe, live from L.A., '87?" Rodriguez continues. "It's great! Lots of bombs. Fireworks."

The quintet's 2003 debut, Living in America, shows no obvious devotion to cock-rockin' hair metal, but does resemble a thrashy Blondie, thanks largely to vocalist Maja Ivarsson. Sporting a platinum shag, icy stare, and empowered 'tude reminiscent of Debbie Harry -- along with a smoky shout possessing as much sass as that of Pat Benatar and Missing Persons' Dale Bozzio -- Ivarsson turns tunes like "Dance With Me" and "Turn Back Time" into perfect post-disco gems. Zippy synths and punkish riffs fight on the fist-pumping title track ("We're not living in America/But we're not sorry!"), "Reggie" careens about heedlessly on the strength of sweat-inducing BPM, and "Hit Me" even features severe saxophone bleats evoking the post-punk of Romeo Void. The sound of the Sounds is unabashedly reminiscent of any flashback weekend -- but don't even think about lumping the group in with the other retrofitters.

"A lot of critics in Sweden think we started with this music because the '80s were supposed to come back," Anderberg says. "But that's totally wrong, because we've been playing this music for five years, and that was way before the '80s revival. There's not a real big thought behind everything. It's more like an impulse thing -- do what you want and don't really think about what people's reactions are going to be."

Indeed, the Sounds mined the Me Decade for inspiration long before the rest of the world revisited its excesses. Rodriguez started the band with childhood friend Bengtsson because they were "bored" while growing up in Helsingborg, Sweden. Ivarsson, a schoolmate of Rodriguez, and Bengtsson's drummer-neighbor Fredrik Nilsson soon came aboard, as did Anderberg, whom they met at a festival in 1999.

The quintet eventually recorded America while touring -- appropriate, since their incendiary stage show attracts as much attention as their music. Recent tourmates have included the Foo Fighters and the Swedish superstar group Kent. A glowing Boston Globe review of their Cambridge, Massachusetts show from last September described an encore of "Hope You're Happy Now" as bursting with "stuttering guitar, powerhouse drumming, and Ivarsson's raucous stage presence as she peppered her lyrics with explosive exclamations."

"We have a reputation of being a pretty good live band in Sweden," Bengtsson understates. "We [had] been playing a lot before we even had a record deal or an album out. I think we played out at least three or four times a month, so people kind of knew about us anyway. You could tell from the audience that we liked being onstage and playing live more than sitting in the studio."

Inevitably, the cultural recycling machine will leave the colorful climes of the '80s for grimy grunge posturing, but the Sounds aren't likely to fade when the fad does. Unlike their bandwagon-hopping peers, their success has never depended upon what's hip or happening. The Sounds, in fact, don't really even seem to care what's popular.

"You don't have to be a really good guitar player or a drummer or a singer or a keyboard player to play in a band," Bengtsson says, eliciting laughs all around. "The important thing is that you have fun and have people in the band that you really like, and make good songs. Everybody can do it."