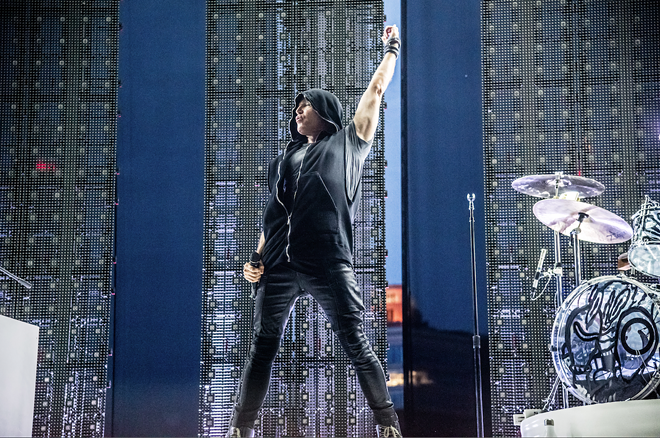 Amber Patrick
Two years ago, Third Eye Blind visited the riverfront Jacobs Pavilion at Nautica and played their self-titled album in its entirety. The show was dynamite. “Tonight is a love letter,” frontman Stephan Jenkins told the crowd.

Last night, the band, headlining a bill that also included Jimmy Eat World and Ra Ra Riot, returned and brought a more even-keeled setlist to the Cuyahoga River. If there's a through-line between Third Eye Blind's visits to Cleveland, it's this: The band thrives on summer, on that school's-out feeling that anything's possible if we focus on love and shared experience.

“We're gonna catch this moment,” Jenkins said early in the show, asking everyone to take a sort of Peace-Be-With-You moment to say hi to the people around them and wish one another a wonderful evening.

Backed by a simple, angular lighting rig that displayed a range of images (a young frontier girl, bombed-out city buildings, etc.), the five-piece moved with confidence through the different eras of the band. Silhouetted at first by mysterious lights, the band opened with a few new tunes that seemed to go over very well. Heavy stuff, foreshadowing what could be another solid album from these guys. Jenkins said the band had meant to get this album out in May, but — it's coming soon. (He also mentioned that they'd recorded a live album on their 2017 self-titled tour, and that they just happened to record it at the show in Cleveland.)

One of the best moments came when Jenkins took the stage alone and sang “Slow Motion,” a haunting summertime elegy that bled neatly into “Motorcycle Drive-By.” The latter is one of the great Third Eye Blind songs — a post-mortem breakup anthem. Halfway through “Motorcycle,” the rest of the band joined Jenkins and turned the place into a massive sing-along.

In fact, most of the setlist felt anchored in that self-titled album. It's an interesting bit of context: Third Eye Blind has always been tethered to its 6x-platinum debut. Released in the spring of 1997, it's an unbelievably dynamic album that holds up supremely well. And while the band has gone on to cut a number of good-to-great albums, it's always drawn back to the early stuff. The hits, sure, but also the deeper tracks. Both “London” and “I Want You” showed up in the set last night.

In the encore slot, the band teased the upcoming album again and played “Waze” before ducking into the tried-and-true drumbeat opening to “Semi-Charmed Life.” The place went nuts, as it had been all night.

And outside the confines of Nautica, the same brutish rain that's been hammering Northeast Ohio for weeks decided to show up again. A summery storm soaked the back rows of the GA seats for much of the show, but then, minutes after the concert let out, the skies cracked open and the rain got crazy. It was a mad dash through puddles, through lines of honking cars, back to the safety of the Harbor Inn. Where else?

Summer, surely, was in full effect. Third Eye Blind practically said as much.

Setlist:
Screamer
The Kids
Never Let You Go
Back to Zero
Can You Take Me / London
Graduate
Wounded
I Want You
Slow Motion
Motorcycle Drive-By
Company of Strangers
Jumper
Bonfire
Something in You
Company
How's It Going to Be