This Is a Shakedown Release CD, Invite Some Cool Pals 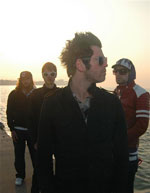 This Is a Shakedown release their Love Kills CD at the Beachland Ballroom tonight. And if hot live electro-rock isn't good enough to get you there, you should still show up ... and get there early.

Also warming the stage are the Kickdrums, Cleveland's best beatmakers who recently turned into a full rock band. But they're getting back to spinning tonight. It'll be your last chance to see them at work before they also relocate to NYC. The tag team are about to release a new rock mixtape EP, There Might Be Blood. Alex "Fitty" Fitts says it's "kinda on more of a Cle-punk/garage style, but in Kickdrums fashion. It'll be eight or nine songs when it's done."

Doors open at 9 tonight. It's all ages. The $8 cover includes a free Shakedown CD. —D.X. Ferris