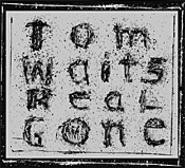 Real Gone, Tom Waits's first record since the double whammy of Alice and Blood Money reaffirmed his artful side in 2002, clanks and wheezes and wails and pontificates, alternating cacophonous, uptempo tunes with dirges, theatrical narratives, and Quaalude reggae. It's a great Tom Waits record, populated, as always, with the loners, losers, and outsiders Waits and wife Kathleen Brennan depict so empathetically and sharply.

Recorded real loud, Real Gone starts with the aggressive "Top of the Hill," a nasty take on hobo jungles. Like many other tunes here, it's a cry about how hard it is to make it. Waits uses his voice like an instrument throughout the album, spanning the guttural rasp of "Hill," the sepulchral blues of the brilliant reggae downer "Sins of the Father," the curdled Hollywood barker of "Circus," and the croon of "Dead and Lovely." If at first Real Gone seems to lack reason (if not rhyme), it ultimately holds together. And if at first it seems chilly -- "Circus" and "Don't Go Into the Barn" are creepy and unforgiving, to put it mildly -- it's ultimately gentle.

Thirty years ago, Waits seemed little more than caricaturist and caricature. As his voice and songcraft have matured, his vocal style has acquired astonishing dimension, and his social visions have come into ever-sharper focus. That many of the latter have come true -- it really is hard out there, so poor that prison can feel like home -- tells us a great deal about our social pain. What makes Waits so striking and singular is that his expressiveness makes for art that is sad and joyous at the same time.