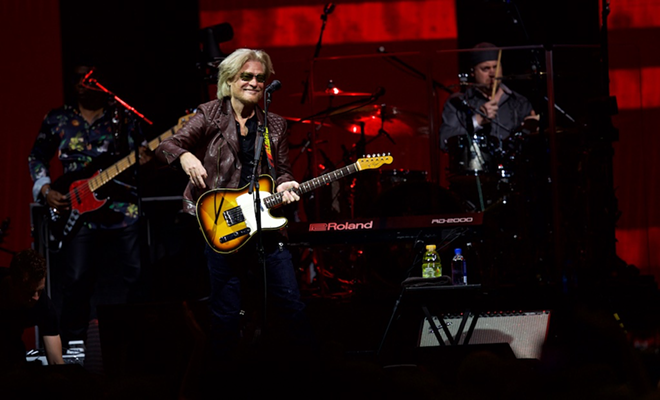 Scott Sandberg
Last night at the Q after an opening set from Train, the crowd was visibly restless as fans waited for headliner Hall & Oates to start.

The wait was worth it — the band delivered a terrific set that showed why they're Rock Hall Inductees.

The group opened with the seductive and sultry “Maneater"; the stage was soaked in red lights, and the sax solo seethed and oozed with sex and soul. Daryl Hall let the crowd know the band's been coming to Cleveland for a long time and alerted everyone that he and Oates would be playing “lots of eras — we hope you enjoy.”

Enjoy the fans did as the band delivered hits like “Out of Touch” and a mellow rendition of the Righteous Brothers’ “Lost That Lovin’ Feeling” which it performed under a rose pink hue. Hall said, “This song defines what we do together” and then slipped into “She’s Gone.” Hall got behind the piano and delivered a sweet version of “Sarah Smile,” ending the song by saying, “And time is talking to me” with a haunted look in his eye.

“I Can’t Go For That” was extended to include a song break during which Hall talked to the crowd about the current state of the world and sang, “Hell no I can’t take it.” It was at this moment the group became a very dreamy, almost Phish-like jam band with saxophonist Charles DeChant performing a breathtaking solo. He looked very much like actor Jeffrey Tambour with a sweeping, long, illustrious silver mane. The track went on forever to the point the audio hallucinogens had kicked in, and it all felt so good and so right.

Hall and Oates then welcomed Monahan from Train onto the stage, letting everyone know that Monahan hails from their home state of Pennsylvania. That explains the title of their new track together, “Philly Forget Me Not,” which they then performed. The track was catchy enough, but there was something slightly off about the marriage of the two bands. They don’t quite go together, and it didn't quite work, but it was pleasant enough, and the crowd tolerated the fairly unknown song. Hall talked about how Monahan was a recent guest on his show Live from Daryl’s House, and they then performed a song they sang on the show together called “Wait for Me.” The collaboration worked best on Train’s spiritual hit “Calling All Angels.”

Monahan left the stage, and Hall & Oates quickly went into fan favorite “Kiss On My Lips” which flowed effortlessly into the genre-defining “Private Eyes," a song that came complete with vigorous hand claps from the crowd. At one point, Hall mentioned he felt like he was performing a larger version of Live From Daryl’s House.

Train started the night off with a solid set. Frontman Patrick Monahan dressed like a Diesel ad in a denim jacket, worn-in black jeans, a stretched-out long black T-shirt and black combat boots. With a beaming smile, Monahan worked the stage while hawking his merch. He then popped on a black baseball hat that said "Call Me Sir" for his new single “Call Me Sir.” His denim jacket had a Train patch on the front and on the back. Despite the logo overload, Train pleased the crowd with hits like “Sweet Virginia,” “Hey, Soul Sister” and the boppy “Drive By.” Monahan prefaced “When I Look to the Sky” by saying it was a song about his mother. His intro gave the track more depth and meaning.

Train shone while performing covers. The band nailed Led Zeppelin’s “Heartbreaker,” but the highlight was an emotional rendition of Tom Petty’s “Free Falling." Monahan shouted, “We only have a few more chances to sing it loud enough for Tom to hear us!” The crowd obliged, and fans sang their hearts out. The band ended the set with the huge hit “Drops of Jupiter.”