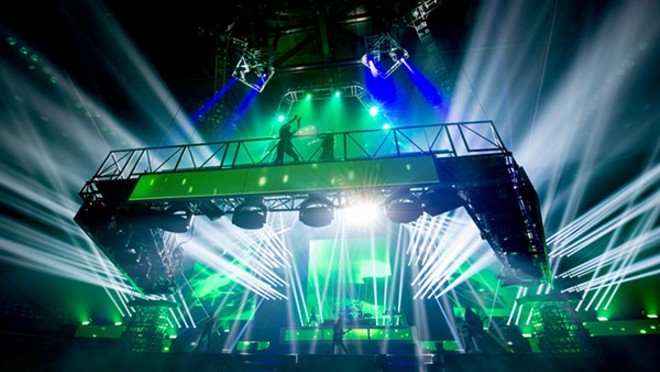 Jason McEachern
In its 20-year history, Trans-Siberian Orchestra has put up some impressive numbers. The band has played more than 1,600 shows for more than 11 million fans. For the past several years, the band’s winter tours have consistently ranked in the Top 10 for attendance and grosses.

This year, it’ll visit 65 cities across North America for 100-plus performances before concluding with two shows on Sunday, Dec. 30, at Quicken Loans Arena.

Originally, the prog band Savatage recorded “Christmas Eve Sarajevo 12/24” in 1995. The song would reappear on TSO’s debut, 1996’s Christmas Eve and Other Stories, and launch the band into the behemoth that it is today.

The first-ever TSO show took place in 1996 at a New York hospital. New York DJ Scott Shannon, whom founder Paul O’Neill has described as “the most powerful DJ in America at the time,” invited the band to play Blythedale Children’s Hospital just north of New York City. O’Neill initially didn’t want to play the show, but once he visited the hospital, he couldn’t resist.

Then, in 1998, the band recorded a TV show before it had ever toured. Filmed in an old Jersey City theater, the show features Ossie Davis, Jewel and Michael Crawford. O’Neill has said the band, though still in the early stages, captured a certain “magic,” as the special features some of the best songs from the band’s catalog at the time.

At the urging of Cleveland disc jockey Bill Lewis, the group took its 1996 Christmas rock opera Christmas Eve and Other Stories, the first part of a trilogy of prog rock-influenced Christmas albums, on the road in 1999. Lewis had been playing the album’s single, "Christmas Eve Sarajevo 12/24,” on WNCX and had gotten great feedback from fans.

The show has evolved over the years to become a visually intense production, complete with lasers and pyro.

“In '99 we started out with one 24-foot box truck and five machines and a couple lights, to where we were last year with 18 trucks, you know, so it's just gotten bigger and better and crazier every year,” says musical director Al Pitrelli in a recent conference call. “Technology's gotten so fast, the computers are so much smaller and the control centers are so much smaller than they've been in years past. We are able to actually do more things in these arenas than you could even fathom 10 years ago.”

This year’s 20th anniversary tour, a presentation of The Ghosts of Christmas Eve, will once again feature O’Neill’s story about a runaway who finds her way into a mysterious abandoned theater. The concert will feature tracks such as "Christmas Eve/Sarajevo 12/24," "O’ Come All Ye Faithful," "Good King Joy," "Christmas Canon," "Music Box Blues," "Promises To Keep" and "This Christmas Day." A second set will feature greatest hits and "fan-pleasers."

As in all previous years, a portion of every ticket sold benefits select local charities. To date, more than $15 million has been distributed from TSO to charities across North America.

O’Neill tragically died in 2017, leaving Pitrelli and Co. to carry on TSO’s legacy.

“[Last year], I think sorrow and the pain that goes along with losing a loved one was prevalent with everybody, but also I think the task at hand was to say, ‘Okay, well Paul had always said we want this thing to live long past all of us,'” says Pitrelli. “I don't think any of us were prepared for that to occur so soon, but we were kind of handed that task. And with his family steering the ship and their guidance, we kind of really hunkered down last year, even more so than usual, to make it the best it could possibly be. And the fact that folks in communities around the country and globally reacted so well to it, and here we are this year exceeding last year's ticket sales, the excitement building towards it, just means that again Paul was right as usual. This will live past all of us.”