The Backsliders' Chip Robinson has a new place to call home. 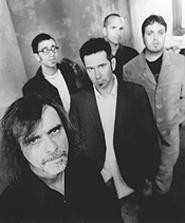 Baby, I was wrong: Chip Robinson, front left, and his fellow Backsliders.
Whenever Chip Robinson, frontman of the Backsliders, returned home after a spell on the road, he didn't find much peace and quiet. For ten years he lived in the All-Star Trailer Park near Raleigh, North Carolina. Down the road was a racing track where stock cars hummed ceaselessly around the oval. As if that wasn't enough, one of his neighbors owned a dog that barked at all hours and without provocation.

Robinson will be sleeping easier now that he's moved out of the trailer park and into a house 45 minutes outside Raleigh. He spent one day in his new home before hitting the road in support of Southern Lines, the Backsliders' latest record. "I just moved everything into a room, locked the door, and split," he says with the voice of a groggy traveler. Robinson's new house, though, is not a sign of sudden affluence for the 41-year-old singer/songwriter. He's renting. "I definitely have not made enough money to buy a house," he says, "unless it's a cardboard box."

Fortune has yet to find Robinson and his eight-year-old band, which makes country-sweetened rock music (picture the boys wearing promotional ball caps from seed companies, not cowboy hats). In fact, the last year was perhaps Robinson's most trying as a professional musician. Band co-founder and songwriting partner Steve Howell left the Backsliders shortly before they were to go into the studio to record Southern Lines, the band's third CD (counting the live, six-song From Raleigh, NC, which is no longer in print). Once in the studio, bassist Danny Kurtz and guitarist Brad Rice bolted to tour with Whiskeytown.

Robinson still isn't sure what happened with Howell, and he doesn't care to speculate. "I really don't know, because I haven't talked with him since he left," Robinson says. "He told me one thing, but it turned out not to be true. I could guess, but I'd just assume not."

Rice eventually returned to finish the record and is with the band for its current tour. The retooled Backsliders also feature Roger Gupton on bass, Rob Farris on keyboards, and Terry Anderson on drums. (Southern rock aficionados will recognize Anderson as the songwriter of "Battleship Chains," which the underappreciated Georgia Satellites recorded on their first album.)

Appropriately but unintentionally, most of the songs on Southern Lines deal with breakup. In the Backsliders' world, couples are either forestalling or coping with a fractured relationship. The opener, "Abe Lincoln," in addition to referencing Jean Harlow and the Flaming Groovies in consecutive lines, says, "You're fading slow/Like a bloodstain on my sleeve."

The music borrows from a wealth of greats, be they Gram Parsons, Patsy Cline, the Stones in country mode, or Tom Petty with Benmont Tench's B3 organ at full whine. Asked what he likes to listen to, Robinson is, predictably, hard to pin down. He says that he might put on an old country album "and then next put on an Art Pepper record and a Replacements record after that and a Hendrix record after that. Whatever mood I'm in. I guess the stuff does get filtered down when you sit down to write."

Alternative country is a delightfully cloudy genre. Is it rock with a drawl and pedal-steel guitar, or simply traditional country music that commercial Nashville avoids like a staggering hobo? If the alt-country definition makes you shudder, the term "bonehead rock" might help, at least when it comes to the Backsliders. Relationships are constantly spoiled by someone's stupidity. Even when Robinson thinks he's found love, as he does on "Burning Bed," he confesses a weakness: "When I look in your eyes/Shallow as your well might be/It still mystifies."

The Backsliders will never be stocked in the world section of record shops, but Robinson is certainly one of the few touring musicians to have sailed around the globe: He joined the Navy at age 21. Seemed like the thing to do at the time, he says now, but something he wouldn't want to do twice. A first-class sonar tech on a submarine, Robinson often spent his downtime and shore leaves banging out songs with a makeshift band of fellow sailors.

He had learned to play guitar, though, years before enlisting. Robinson begged his parents for lessons when he was eight. "A couple of years later, I convinced my mom and dad that I wanted an electric guitar," he says. "It was a Japanese electric with one pickup."

Robinson was never much for the endless scales and drills of formal instruction. "I wanted to play rock and roll songs," he says. "The teachers said, "You have to do this.' And I said, "No, I want to do this.'" His real schooling came from the older kids in his neighborhood, guys who never could seem to put a band together but knew enough about guitar to goof around on the front porch. The first song he can remember playing straight through is "Louie, Louie."

Robinson is not a man who cares to elaborate, about his childhood or the near-implosion of his band. When he talks about the future, he mumbles something about the current tour and a possible swing through Europe—nothing more distant.

His mind, you sense, is on getting to the next gig, making rent payments on that new house, and getting things right with his woman.