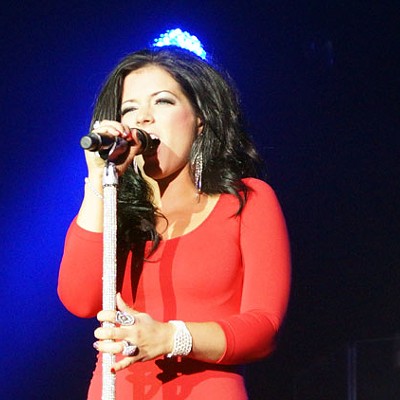 Click to View 15 slides
By contemporary country music standards, singer-guitarist Travis Tritt, who played Hard Rock Live last night, is anything but cool. Tritt, who emerged at about the same time as Garth Brooks and Clint Black, was a huge star in the ’90s but hasn’t maintained the same level of popularity. He doesn’t have the chiseled frame of Tim McGraw or Kenny Chesney. He even sports a mullet, for Chrissake. And his stage show isn't a big-time production. There was no giant LED screen video screen on stage to project his image and the lighting rig wasn't very elaborate. But Tritt has got plenty of charisma and that came through clearly during a two-hour concert. Digging into the back catalogue of his 20-year career, the guy had the capacity crowd on its feet singing along with his hits for the bulk of the set.

Arriving on stage to the “House is Rockin’,” which played over the house PA system, Tritt opened with the rousing “Put Some Drive in Your Country.” He immediately catered to the crowd, making a reference to the Buckeye State during the boisterous power ballad “I’m Gonnna Be Somebody” and beckoning audience members to get riled up for “Whiskey Ain’t Working” by yelling out, “You know what I’m talkin’ about!” The rowdy crowd — some people even tailgated in the parking lot before the show — was behind him all the way, even as he busted into some cheesy dance moves during “Rub Off on Me.” He turned the house lights on for his rendition of “Take It Easy,” which again had audience members singing in unison.

Sitting in a giant chair that looked like it was a bucket seat stolen from a race car, he delivered a mid-set acoustic segment that lacked some of the urgency of the rest of the set but concluded with the vigorous instrumental “Pickin’ At It.” The song was hardly the set’s highlight, but it did show off Tritt’s skill on the acoustic guitar. And, as he told the audience, “Even if you don’t like it, act like you do.” The show got back on track with “Here’s a Quarter (Call Someone Who Cares)” — a tune that again showed his age — and “Country Club.” He closed the set with the hard rocking "T.R.O.U.B.L.E." The encore’s highlight was a cover of “Midnight Rider,” a tune for which Tritt’s husky voice was perfectly suited.

Nashville-based singer Lyndsey Highlander opened with an acoustic set and was charming enough (she graciously hung out in the lobby after her set to meet and greet fans). But the stripped down songs lost some of their power and just didn’t compare to their studio counterparts which are far moodier and darker.