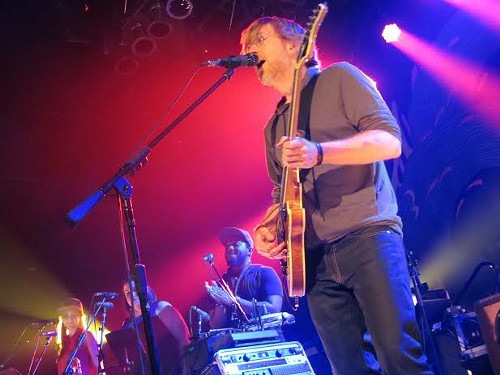 The announcement that Trey Anastasio would be bringing his solo band to Cleveland and Cincinnati right before Summer Camp Music Festival came as a terrific surprise. Unsurprisingly, though, the shows sold out in the blink of an eye.

(This is how it goes: Trey Anastasio along with Phish bandmates Mike Gordon, Page McConnell and Jon Fishman have built an empire with a strong foundation of incredibly strong musical improvisation and a sense of community unlike nearly any other band still touring today. So when Trey or whomever hits the road solo, the fervor is on par with their Phish endeavors. All of these musicians are absolutely bubbling with creativity these days [see Trey setlist below; the latest Mike Gordon album; the forthcoming Phish album].)

Anyway, the Trey Anastasio Band took the stage at the House of Blues last Friday, and with that SUMMER HAS OFFICIALLY BEGUN.

Notably, the whole show featured strong jamming throughout. Trey has been on fire for the past few years; he's hitting one of several titanic, career-wide peaks. There was an undeniable feeling in the air that, while TAB was just absolutely shredding it up, Phish tour is right around the corner. But, of course, what brought us all to HOB last Friday was the promise of Trey's solo excursions, rounded out bountifully by his incredible band. And they threw down with zeal.

From the eerie opening drum beats and bass lines of "The Land of Nod," everyone in the sold-out crowd knew that good things were about to happen. Trey was looking characteristically ecstatic as the music began. There's something cheery about the way Trey literally jumps and fist-pumps and whoops and hollers during shows. His is an iconic personality - one that drives well earned feelings of nostalgia and optimism when he's on the road.

"Gotta Jibboo" showed up the first-set closer spot and offered a nice cut of full-band improvisation. Led by Trey, the brass section dove into full-on dissonance and just straight-up weirdness (all of which shared DNA with the 7/14/13 "Light" from MPP last summer), and the return to "Jibboo" theme was triumphant. That jam set the stage perfectly for the second frame. And with that, seemingly the entirety of the HOB headed up the stairs and out to Euclid Avenue for a smoke or two. 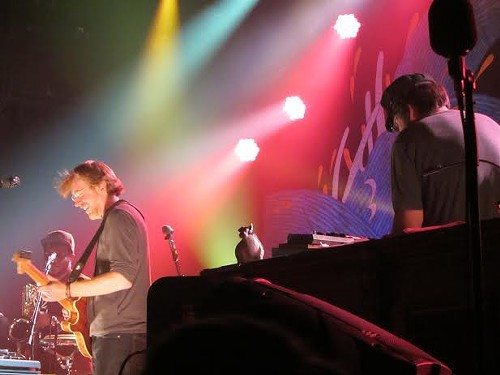 As is the style of Trey's undertakings, the second set was riddled with high-intensity improvisation - and more of the good stuff than many had anticipated prior to the show. With respect to improv, there's a widely held thought among the community that TAB can be Phish-lite, meaning there's less of a focus on exploratory jamming on these solo outings. And while most of the night's improv was reined-in Type-I stuff, the musicianship was unreal.

The band closed the night with "First Tube," which is always in the encore slot. The entire venue was just bouncing as the show waned toward its final moments.

We left, high on something unnameable, and looked skyward for a summer of joy.

(You can snag an audience recording of the show online.)

Set 2: Sometime After Sunset, The Song*, Night Speaks to a Woman, Shine, Plasma, Architect, Sand, Clint Eastwood, Push On 'Til the Day