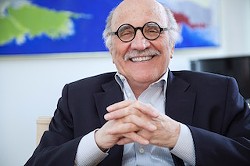 Back in 2012, the board of trustees of Cuyahoga Community College named the College’s arts center the Tommy LiPuma Center for Creative Arts in recognition his support of the Cuyahoga Community College Foundation. He still comes to town as a special guest lecturer and adviser and shares knowledge with students, faculty and staff through frequent visits during the academic year.

On June 23,, Diana Krall, Al Jarreau, Dr. John, Leon Russell and the Clayton-Hamilton Jazz Orchestra, all artists he's produced over the course of his 50-year career, will honor him at a special concert at Connor Palace. Billed as Tommy LiPuma’s Big Birthday Bash, the show kicks off the 37th annual Tri-C Jazz Fest, a busy weekend of concerts and events (go to the website for a complete schedule). We recently spoke to LiPuma by phone and asked him to talk about the different stages of his career. Here’s what he had to say.

“I came down with an illness when I was about 8 or 9. I was laid up in bed for a couple of years. Radio was my savior. Thank God my mother loved music. She got me a tabletop radio. That’s where I accidentally turned on WJMO and it was the only R&B station at the time. JMO in those days would play Charles Brown, Big Maybelle and Ruth Brown. I was brought up with Harry James and Jo Stafford — that wasn’t even R&B. African-American artists such as the Mills Brothers and the Ink Spots would get some play on white radio. This was like finding a new church. I couldn’t believe it when I found it. That’s where I cut my gums, so to speak, on R&B music.”

“I had taken up piano just about six months prior to getting ill. I’m not ambidextrous. It was difficult for me to get two hands going at the same time — not that I wasn’t able to, but it didn’t come natural to me. I sensed it wasn’t the instrument for me. I was going to Warrensville Elementary and there was a great teacher there who was a trombone player. In those days, all the schools had instruments. He sensed that I was interested and loved music. He pulled me aside one day and introduced me to all these instruments. I picked a clarinet to begin with. I wasn’t crazy about the sound of it, but once I found the saxophone, I was playing gigs within two years. I was 16. The [clubs] didn’t know I was 16, of course.”

“I was a barber by trade. My father was a barber and my uncle too. When I went back to school after becoming ill, they put me two years behind. School was never it for me. When I got to the tenth grade, I quit. By that time, I was 18. It wasn’t for me. My father said I had to learn a trade. Of course, I learned the barber business. I ended up fucking hating it. I couldn’t stand it. Thank God I had music. I was playing three or four nights a week as a musician. That kept me from committing suicide. I worked on 17th and Euclid. All the radio stations were right in that area. I started getting disc jockeys and promotion men as customers. I realized it was the business I should be in. I kept asking, but nobody took me seriously, but then someone did. I went on the road with a band for about a year and was playing every toilet in the United States from Fargo, North Dakota, to Mishawaka, Indiana. I came back home and this guy who had been a promotion man took over as a manager of a distributor in Cleveland. He called me and said he would pay me 50 bucks a week to pack records. I did that for two or three months. He put me promotions, and I was on my way. Within a year, I gained a reputation and got hired by a guy who used to be in Cleveland by the name of Bob Skaff. He gave me a gig in L.A. as the local promotion guy.”

On to A&M Records

“After doing promotion, I got into music publishing, but you had to make demos. I was working with Randy Newman and Jackie DeShannon. I used to make demos with them. That’s when I got into what it was about to make a record. That took me to A&R. A couple of friends of mine — Jerry Moss and Herb Alpert — they started a record company and hired me as their first staff A&R guy. I was at [their label] A&M for about four years. The first thing they asked me to do was a group called the Sandpipers and I had a big hit with them. They were friends with Andy Williams and his wife wanted to do something. She was very nice but not really a singer, but I had a hit with her and we sold a million albums. I thought I was getting stereotyped and I didn’t want that.”

“[Blue Thumb Records] was great. We had Dave Mason from Traffic and the Pointer Sisters and the Jazz Crusaders. The first act I signed was Dave Mason, and we did [1970’s] Alone Together, which was a big album. We had T. Rex and Dan Hicks and the Hot Licks. Every time, we had something that came close to smelling like a hit, the majors would come along and steal them away. We sold the company to ABC and we both went to work for Warner Bros. My friend Lenny Waronker, whose father owned Liberty Records, had become head of A&R at Warner Bros. I knew [record executive] Mo Austin too. I knew him when he started Reprise when I first went out there. That’s how I started producing records. Once I got to Warners, I really started swinging.”

“When I was with Blue Thumb [in the ’70s], I was one of the owners, so when I was asked to work with [Barbra] Streisand, so I just asked my business partner about working with Streisand. He said, ‘Go ahead.’ It was great. In those days, she still really had her chops, and it was a great experience. It was The Way We Were album. I loved working with her. She was a real pro. After that, I went to Warner Bros. and the first act I signed there was Michael Franks and we had a gold record with The Art of Tea, which is his first album, and then I signed George Benson and things exploded. His first album sold about 15 million album and that started the ball rolling. And then we signed Al Jarreau and David Sanborn and then on and on. It was ridiculous. There was so much happening and so much talent. There’s no way you could recreate these talents. Fortunately, it was all recorded. This goes back to ’30s and ’40s when swing started and all of that. Thank God, all of that was recorded because that still holds up. I was a complete freak for all that stuff.”

“My Blue Thumb partner Bob Krasnow eventually ended up taking over as chairman of Elektra. I went to go work for him after I was at Warner Bros. for 17 years. I moved to New York in 1984, and Bob asked me to join him at Elektra in 1990. It’s funny when I think about it. I had known the few hits Natalie had. I wasn’t a huge fan or that well-versed on all the things she had done. A month or so before my partner Bob had mentioned her to me, I heard her cover of Bruce Springsteen’s 'Pink Cadillac.' It was great. She sang her ass off on it. I caught her doing it on MTV. About a month later, Bob got a call from Dan Cleary who was her manager. They wanted to know if we were interested. I said we were. Before we got together with her for the first time, I thought it would be great if she did her father’s songs. I wasn’t sure how she’d handle standards. I mentioned it to Bob, and he thought it was a great idea. We mentioned it her, and she said she wanted to do it for the last 10 years, but Capitol didn’t want to do it. She didn’t want to do as her first album for Elektra. She wanted to do it as the second album. I told her that an idea is like a virus. Once you say it, it gets out there. The next thing you know, Johnny Mathis will do it. It takes the polish off of it. She thought it over for a few days and she called us back and said she wanted to do [1991's Unforgettable].”

“I became president of GRP records in 1994. They were in the process of talking to Diana Krall, and they wanted to sign her. They picked up her first album. She had done an album for a small company in Canada. They put it on, and I really wasn’t impressed. Thank God they had a video of her and the piano. She had done it for a program on BET. She sang ‘Body and Soul.’ I thought, ‘Goddamn this girl can sing.’ It grabbed me by the throat. I thought she was really great and I said, ‘Absolutely.’ The first album was a direct to 2-track. The second album was [1996’s] All for You: A Dedication to the Nat King Cole Trio, an album we did with just guitar bass and her and the vocals. She did all the classics. The third album was called [1997’s] Love Scenes. She did something called ‘Peel Me a Grape.’ That broke her open. That album did about 100,000 and for a jazz album that was unheard of. The next album was with a full orchestra. That was [1999’s] When I Look in Your Eyes. That’s when she really broke. We sold two million copies, and she was nominated for album of the year. She had been going since she was 18 or 19 when she moved to L.A. and met John Clayton who’s a great bassist and arranger and Jeff Hamilton who’s a great drummer. When I met her she was 28, but she had been on the road getting her chops together.”

“I haven’t done the last two Krall albums but she wants to go back in and do something with me. I’ll do her album in October. I’m working on an interesting project with [singer-pianist] Michael Feinstein. It’s the complete works of George and Ira Gershwin. That could be fun. It’s a big job. There’s about 250 things they wrote together. It will be a 10-CD boxset. Of course, I did this album that’s coming out June 10 with [trumpeter] Dominick Farinacci, and that turned out great. Its called Short Stories. We recorded it at the Center for Creative Arts in Cleveland. It turned out great. I’m very happy with it. He’s one of those guys who wants to give back. My two passions in life remain music and art, and I’m really committed to both of them.”