Up From the Ashes

Ascension reunites for the biggest hardcore show of the year. 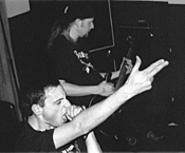 Chimaira guitarist Matt DeVries is known by his bandmates as "M.F.A." ("Man From Ascension").
Though Chimaira has sold more than 80,000 copies of its latest LP, toured the world, and regularly graced MTV 2's Headbanger's Ball, lead guitarist Rob Arnold still calls rhythm guitarist Matt DeVries "M.F.A." ("Man From Ascension") -- Ascension being DeVries' pre-Chimaira band that won't stay dead. On a recent Thursday afternoon shortly before Chimaira's nightly practice-writing session, DeVries turns down a beer at the Warehouse District's Water Street Grill, but accepts a coffee -- he has work to do -- and begins discussing the biennial reunion show of the metalcore forerunners, who developed a modest international following and have ties to three of modern-day Cleveland's hotter properties.

"Looking back, I think Ascension had a small influence on the scene and what it came to be," says DeVries, keeping warm in a faded black Killswitch Engage hoodie, his long auburn hair pulled back under a black knit Slayer cap. "I try not to have an ego, but that's what I've heard."

In the late '80s and early '90s, pundits declared the metal-hardcore crossover dead. As usual, the news reached Cleveland late. By then, Cleveland-based Integrity was pioneering the now-burgeoning metalcore movement, combining metal riffage with hardcore minimalism. In 1995, Ascension formed from the ashes of Falling in Line, a group founded by metal kids who had discovered New York hardcore.

"Ascension were in the second wave of Cleveland metalcore-hardcore," Integrity frontman Dwid recalls. "It was the Cleveland hardcore band that really embraced metal. Integrity and Ringworm were always exploring metal influences, but Ascension really took the metal ball and ran with it."

As with most Cleveland bands, dissect Ascension, and you'll find connections to the city's past, present, and future in the band's lineup. DeVries went on to a brief stint in Integrity before spending two years in Ringworm and then joining Chimaira. Bassist "Metal" Dave Johnson, previously in the punk band Splinter, recently joined the Parma metal group Soulless. Craig Ramsey, former drummer for swing-rockers Ace and the Ragers, now hits the skins for pop sensation Kiddo. The band, rounded out by singer Chris Wood, recorded two albums, linking Clevocore and modern Cleveland metal.

Ascension's 1996 debut, The Years of Fire, plays like a no-frills hybrid of Slayer and Metallica slathered in sludge. By 1997's Abomination LP, Ascension had evolved into a worthy successor of the Integrity-Ringworm hardcore model: blowtorch vocals, burp-gun riffage, and a rhythm section that sounds like collapsing concrete. "Center Circle Pawn" suggests Black Sabbath fused with Agnostic Front, DeVries blasting through post-jazz-guitar grooves as a song's-length series of breakdowns erupt.

"Some kids tell me that they still listen to the albums all the time," says DeVries. "That's cool, and I appreciate it, but I can't do it. I think it was good for what it was."

Following the lead of Cleveland crossover favorites like Ascension, modern metal and hardcore bands have blurred the line between the two genres. A decade later, DeVries isn't a big fan of the contemporary scene.

"Nowadays, you have hardcore, emo, metal, eyeliner-core, whatever you want to call it," he says. "Everyone has their own clique. Back then, there wasn't a huge distinction between metal and hardcore, but you could definitely tell the difference: Metal kids had the long hair, hardcore kids had shorter hair. In the metal scene, kids were just moshing. Hardcore pits hadn't really evolved. Nowadays, you have all the East Coast hardcore kids throwing flying kicks, doing karate moves. Back then, it was pretty much kids singing along, fingers in the air, from the hardcore scene, and metal kids headbanging and running into each other."

In its heyday, Ascension regularly gigged at the Euclid Tavern and the Phantasy Nite Club, and opened for visiting major-leaguers like Earth Crisis. Released on Chicago's Toybox Records, Abomination found European distribution -- Dwid reported seeing the group's T-shirts at overseas shows, and Chimaira found an Ascension 10" in a German record store in 2002. Singer Wood's pursuit of a physical-therapy degree limited the band's travels to weekends and three small national tours, and often kept him away from rehearsals. For Abomination, he put off writing lyrics until the band was in the studio, recording instrumental tracks. In 1998, Wood left the group to concentrate on school. Ascension limped along for a few months. Bassist Johnson says the shows weren't the same without Wood's incendiary presence.

"Back then, our shows were very energetic and kinda violent, but in a more positive way," recalls Johnson. "If you go to a show today, there's always some asshole trying to prove what a great ninja he or she could be: Someone gets hit in the face 'by accident,' and then you've got a fight on your hands. Our shows weren't like that. There was more interaction between the band and the audience. Most people I see moshing these days make me wonder if they can even hear the music. The audience at an Ascension show was part of the performance. Chris had this way of taunting people. It could get a bit crowded on stage with people trying to pile on the microphone, but the energy was amazing."

Ascension was officially laid to rest in 1999. The group played one-off shows in 2000 and 2002, and continues to be an important reference point in Cleveland's extreme-music scene. The band's upcoming reunion gig at Peabody's this Saturday will be the biggest Cleveland hardcore show of the year, featuring local all-stars Ringworm, Soulless, Dead Even, and State of Conviction, a side project of former Mushroomhead frontman Jason Popson, which played its first show with Ascension.

"I think it's just a fun thing to do," says DeVries. "It's not just a show. It's a reunion of friends. Ascension broke up for a reason, and we all went on to bigger and better things. But you always want to revisit the past. It's fun for shits and giggles."