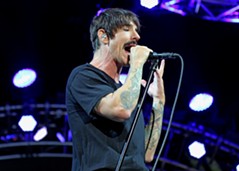 Samantha Fryberger
Anthony Kiedis of the Red Hot Chili Peppers
To mark its 25th anniversary, Lollapalooza, the annual alternative music fest that takes place at Chicago’s Grant Park each year, brought back a couple of veteran headlining acts that performed at past Lollapaloozas for this year’s event, which took place this past weekend. That proved to be a wise decision.

Red Hot Chili Peppers and Radiohead, both of which have performed at the fest in the past, played sets that displayed why they’re still relevant and why they’re still terrific live acts. The former, a Rock Hall Inductee, and the latter, a future shoe-in for induction into the Rock Hall, played to capacity crowds during the four-day festival. You can see a slideshow of photos from the concert here.

Radiohead’s enigmatic frontman Thom Yorke looked like a cyborg as he performed with his hand wrapped around a portable keyboard. The wires from his earphone monitors made it look like he was literally patched into the circuitry. He regularly adjusted the knobs on his keyboard/controller to elicit a variety of electronic bleeps and blips that wove in and out of the band’s music from the set’s opening track, “Burn the Witch,” the noisy single from the group’s latest album, A Moon Shaped Pool. The band dug deep into its back catalog for “No Surprises” and “Karma Police,” somber ballads from its groundbreaking 1997 album OK Computer. The two-hour set had an epic quality to it and the deep purple and amber red LED lights that flickered behind the band throughout the show amplified the music’s prog and psychedelic dimensions.

With the exception of guitarist Josh Klinghoffer, Red Hot Chili Peppers members have all entered the half-century club. But you wouldn’t have known it from the high-energy set they delivered at Lolla. During a set that began with a vigorous, funk-fueled jam, the group launched into crowd favorites such as “Can’t Stop” and “Californication,” both of which sounded just like their studio versions. Head-bobbing bassist Flea and hard hitting drummer Chad Smith kept perfect time and even improvised on occasion without missing a beat. Singer Kiedis quickly disrobed to prance the stage in nothing more than shorts and sneakers, alternately delivering rapid-fire raps and falsetto-like croons.

This year’s incarnation featured a few stellar collaborations. Rage Against the Machine/Audioslave guitarist Tom Morello gave the Jane’s Addiction tune “Mountain Song” a jolt when he came onstage to jam with Jane’s guitarist Dave Navarro during Jane’s Addiction’s set. Rappers Vince Staples and Vic Mensa each made cameos during Flume’s set, adding a human element to the electronic beats and samples that the Aussie DJ delivered. And Brandon Riley provided soulful vocals on “Moving Mountains” with the EDM act Disclosure, taking center stage while the band’s two DJs/multi-instrumentalists operated from enormous booths during their headlining set.

While this year’s event attracted its fair share of fans too drunk or drugged up to really appreciate a nuanced musical performance or show any common courtesy when it came to respecting the personal space of other fans, the festival continues to operate like a well-oiled machine. Bands regularly started and concluded their sets exactly on time, and the sound quality on the main stages was razor sharp.

And though you couldn’t walk two feet without running into a stand serving Budweiser, the event included a kids’ area that featured “hairdooz & tattooz,” ping pong tables, yard games, photo booths, theatrical ensembles, half pipe skating demos and drum lessons. At least it tried to be family friendly.

Though Lollapalooza puts a strain on Chicago’s infrastructure (we witnessed some nasty traffic jams as we walked to and from the festival), it also brings in an astonishing amount of revenue. Last year, it reportedly injected $155.5 million into the local economy (take that, RNC!). The festival earned over 63.2 billion media impressions at a value of over $37 million dollars (and that!).

After the festival ended at 10 each night, fans continued to party and regularly flocked to city’s local bars, restaurants and music clubs.