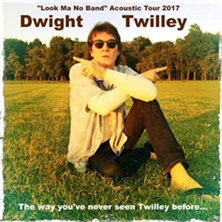 At 65, singer-songwriter Dwight Twilley can remember the days when commercial radio welcomed up-and-coming artists into the studio for intimate acoustic performances. As much as that might sound like a singer-songwriter’s dream come true, he says he never cared much for the format.

“I’m used to going out with a full rock ’n’ roll band with all the singers,” he says in a recent phone interview from his Tulsa home.

Twilley comes to Cleveland for the first time in a long while (the local promoter maintains it’s been 30 years since he played in town) to perform at 9 p.m. on Saturday, March 25, at the Euclid Tavern.

A couple of years ago, Twilley's aversion to performing unplugged changed. At a show in California, the concert's organizers asked him to play a couple of acoustic songs in his set. Twilley, a guy who comes off as very affable and accommodating, obliged.

“I said, ‘Why not?’” he recalls. “They were paying good money. I was surprised by the reaction from the audience. I realized I kind of liked it. My hits tend to have a lot of voices on them, and it’s hard for that to translate with just one singer. I shied away from that, but it snowballed from there. The next person wanted five songs. Now, it’s been 60 minutes and an hour and a half sets. One of the things that’s really rewarding after all these years is that there are songs I never did live that didn’t fit into the rock show. I can do things I haven’t done and things people haven’t heard me do before. It’s kind of cool. We really enjoy it. We’ve played all over the country.”

Exposed to the Beatles when he was still a teenager, Twilley picked up the acoustic guitar that his brother had stored in the closet. While his brother hoped to one day learned to play, Twilley had a more urgent desire to master the instrument.

“[My brother] was thinking about playing guitar, but I yanked it out of there, and my dad showed me a few chords,” Twilley says. “I discovered the Beatles songs were too hard to play, and I thought I should make up my own songs.”

In what Twilley describes as a “fairytale story,” Phil Seymour, another Beatles-obsessed kid from his neighborhood, shared his passion for singing and songwriting, and the two began to collaborate.

“I was writing these pretty little songs,” says Twilley. “We sounded pretty too. I would play the acoustic. At one point, we wanted to have a record company hear it. We didn’t have enough money to drive to L.A. or go to New York. We had heard they had record companies and studios in Memphis, and that wasn’t that far. We got in my '58 station wagon and started driving down the streets in Memphis.”

Eventually, Seymour pointed out one place looked like a recording studio.

“We were too naïve to know that you didn’t just walk in and expect someone to listen to your tape,” Twilley says. “So that’s what we did. The guy was probably so shocked that he got a kick out of it. He listened to it on a whim and liked it. It meant nothing to me that his name was Phillips, and I had never heard of Sun Records. We thought the Beatles invented rock 'n' roll, and Elvis was just a guy in movies.”

The Phillips to which Twilley refers was Jerry Phillips, son of Sun Records owner Sam Phillips. He sent Twilley and Seymour to Tupelo to work with Ray Harris, a rockabilly musician and songwriter.

“We really got a serious education into the roots of rock 'n’ roll, and that changed everything,” says Twilley. “I think a lot of people were skipping the true roots of rock n’ roll. He gave us a life-changing lesson. The first thing he said was, ‘You all sing like pussies.’ The truth is that we did sing like pussies. He listened to my songs and said, ‘Dwight is a talented boy, but he’s too spacey. He needs to put some meat and taters behind his songs.’ The truth is, I was too spacey. It made the difference for us to get that education.”

About a year after working with him, Twilley and Seymour built their own studio in Tulsa, so they could record their own damn songs. In fact, after they recorded their Dwight Twilley Band debut album, 1976’s Sincerely, in England, label owner Denny Cordell told the guys he liked the way they recorded themselves better. He had them retool the tracks in Tulsa. The album includes “I’m on Fire,” which the band had released as a single a year before the disc’s release. With its cooing vocals and catchy guitar riff, the song sounds every bit as infectious as anything by Big Star; it established Twilley as a power-pop icon.

After Dwight Twilley band dissolved in 1978, Twilley continued to tour and record as a solo artist. In 2014, he released his latest studio album, Always, which suggests his power-pop sensibilities remain as sharp as ever. He’s currently touring in support of a two-CD compilation that includes 40 songs (from 1999 to 2016) and a 20-page booklet that provides an overview of his career.

Twilley says he’s enjoyed his “Look Ma No Band” solo acoustic tours so much that he wants to continue to perform live and keep his studio commitments to a minimum. Following the shows, he hangs out to meet and greet the fans and sign autographs.

“It has been hard to get us out of the studio,” he says. “We promised ourselves that after the last release that we would go out and play these songs. We’ve been concentrating so much on recording, but we’re not recording at all now. We’ve played Chicago and New York and down into Texas. We’re hoping to keep that up for the entire year.”