Cleveland jazz historian/clarinetist John Richmond is legendary for his devotion to vintage jazz. He once told me that, as far as he was concerned, no good jazz had been made after he had been born (that was sometime in the ’40s). When we were both writing about music for the Plain Dealer in the ’80s, many jokingly warned, “Don’t send John to anything where the musicians plug in — he’ll just pan it.”

Richmond put his expertise in early jazz (and his extensive collection of vintage jazz film clips) to good use last night in what was billed as the “first” Classic Jazz on Film program at Nighttown. A small combo, featuring Nighttown regular, drummer George Foley, played classic Dixieland-style jazz before and after the one-hour program — which, for all the nostalgists out there, was shown on one of those screens-on-a-stand and a big old projector that spewed film early in the program. (My suggestion to Richmond afterward, that he put the whole program on laptop, was met, predictably, with a recoil. Purist Richmond only deals in film, not video, DVDs or digital files.) 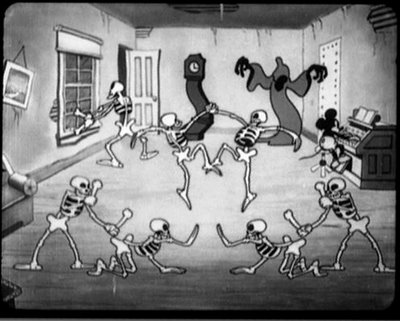 Richmond screened clips from the ’30s and ’40s — and one as recent as the early ’70s! — that featured the Count Basie Orchestra, vocalist Eddie “Cleanhead” Vinson, Cootie Williams & his Band, vocalese ensemble Lambert, Hendrix and Ross, and even a macabre Betty Boop cartoon in which ghosts danced to Cab Calloway’s “Minnie the Moocher” (pictured). For those who think MTV invented music video, a Delta Rhythm Boys clip from the ’40s showed the vocal quartet performing the Billy Strayhorn-penned Duke Ellington Orchestra tune “Take the A Train,” as they and a crowd of well-dressed extras acted out boarding a train for Harlem, debarking and sashaying down the street to a nightclub where a quartet of leggy dancers entertained. Richmond also showed a series of clips featuring Ina Ray Hutton and her all-girl orchestra. Hutton, a flirtatious blond bombshell who seemed to have a sparkly, clingy gown for each number, not only conducted but also sang and danced while the orchestra played. In a 1935 clip, “Doin’ the Suzi-Q,” she did all three at once.

Although the performances may seem stagey and exaggerated to viewers now, the quality of the music and the performers’ obvious enjoyment and commitment resonate across the decades. Here's hoping Richmond will put together another such evening from his treasure trove of films soon. — Anastasia Pantsios