Walkin' Cane Around Town This Weekend 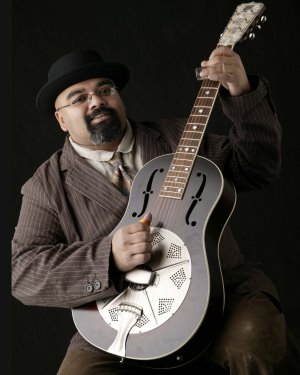 Singer/songwriter/guitarist Austin “Walkin’ Cane” Charanghat has been a fixture on the local blues scene for years, but 2009 has been an exceptionally good year for him. Chosen to represent Cleveland at the International Blues Challenge in Memphis in February in the solo/duo category, he placed in the Top 5 among the 64 artists competing in the category.

He also performed at the FIMU festival in Belfort, France in May, did a two-week tour of France and Germany, and now he’s packing his bags to head to Kathmandu, Nepal, for the 3rd Himalayan Blues Festival (himalayanblues.com) from October 7-11, joining artists from Nepal, Australia, New Zealand, the U.K., India and Norway.

From 9-11 p.m. tomorrow at the Parkview, Charanghat will showcase the stuff he’ll be playing in the Nepalese capital. It’s free, but he’ll gladly accept your donation to help cover expenses (in addition to your good wishes for a safe trip).

Then on Saturday, Charanghat will join five other blues acts for the 2nd annual Ohio City Blues and Brews Fest at Wendy Park on Whiskey Island. The fest, which runs from 2-11 p.m., also features Jeff Powers, Memphis Cradle, the Colin Dussault Blues Project, the Armstrong-Bearcat Band and Milwaukee’s Blues Disciples.

It’s a benefit for the Ohio City Near West Development Corporation and the Wendy Park Foundation. Tickets are $15 advance, $20 at the gate. Kids under 10 are free. You can get tickets here. —Anastasia Pantsios