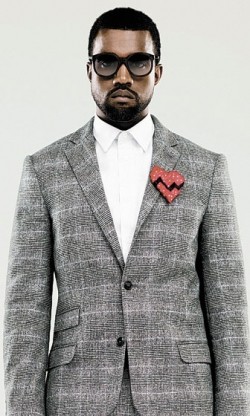 When Kanye West put an end to his college trilogy with last year's Graduation, he wasn't kidding around. Turns out he was more than ready to move on to the real world. On his fourth album, 808s & Heartbreak, West pretty much abandons hip-hop rapping (usually his weakest spot) in favor of R&B singing, with much debt owed to T-Pain or, more specifically, the Auto-Tune program the top-hatted crooner helped popularize.

Foremost, 808s & Heartbreak is a breakup album. And what better way to convey grief than with software that makes every word that leaves an artist's mouth sound like the saddest thing in the world? You can sing about strippers servicing you in the Champagne Room and it still comes off like an elegy to a lost homie. Of course, Auto-Tune also turns its users into mercury-blooded robots bent on global domination.

The blips and beeps of opener "Say You Will" set the album's tone.

Throughout, West is in rumination mode rather than party mode. He channels Radiohead by way of Depeche Mode here, working his way through heartache by constructing thin soundscapes around even more bare sentiments. "My friend shows me pictures of his kids/And all I could show him was pictures of my cribs," he sings on "Say You Will," choking back regret.

Most of the time, though, West swathes himself in self-pity: "Where did I go wrong?" he asks on "Welcome to Heartbreak." "I'm a problem that I never resolved," he sighs on "Amazing." So when "Love Lockdown" kicks in with a percussive march to the dance floor, it's not only unexpected, it's exciting.

West has all but dominated '00s hip-hop by positioning himself as one of the genre's few wide-thinking practitioners. On 2004's The College Dropout, Late Registration the following year and Graduation, his innovative use of beats jumpstarted a flagging field. All of 808s & Heartbreak's beats were built on an old-school Roland TR-808 drum machine. How's that for high concept? Add a dozen songs about his broken heart (West split from his fiancée shortly before starting work on the album), and it's off the charts. (West's mom died about a year ago, and her death also informs 808s & Heartbreak. One song - "Coldest Winter" - is explicitly about her, but Mrs. West's spirit haunts many of these cuts.)

Midway through the album, 808s & Heartbreak begins to show its flaws. The AutoTune feels a little gimmicky, and its cold, robotic vocal tricks leave the CD with a slightly less revolutionary vibe than any of West's previous records. Still, it's an interesting work, another left turn by an artist who's fashioned a career of going in wildly different directions. Let's hope by the time he makes his next album he's mended his broken heart and found his way back to Earth.