Xtina is the world's greatest entertainer. 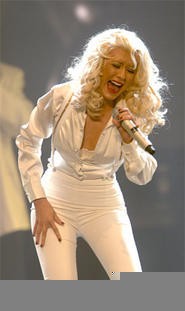 Aguilera cries out for her hydraulic bed.
DragonForce would slaughter Chimaira in an expert-level Guitar Hero match. But in the real world, a spectacle beats chops any day, which is exactly what both bands are proving on their current tour of the United States. While DragonForce's twin guitarists executed unfathomable tapping techniques and absurdly complex harmonies, hometown heroes Chimaira eclipsed their technically superior tourmates by buttressing their thrashy hardcore with spectacular light flares, billowing fog, and cathartic head-banging.

This, believe it or not, brings us to . . . Xtina. That's right. Since she began touring as a teenager, Aguilera has attempted to convert her unrivaled chops into a captivating live show, one that combines the opposing DragonForce/Chimaira facets of her talent. And she has succeeded: Instead of relying exclusively on her megaton voice, Aguilera now supplements it with a knowing flair for holy-shit spectacle.

In order to understand how this happened, let's start at the beginning . . .

During Aguilera's 1999 tour in support of her self-titled debut, she merely did the expected: employing dancers and changing costumes. Also, she was peddling pop schlock composed by songwriter Diane Warren. The show was just another generic teen-queen showcase. This, despite the fact that Aguilera superseded just about every one of her peers in terms of raw talent.

Wrongly dismissed as commercially bred skankiness, Stripped, Xtina's 2002 follow-up, represented her evolution from a corporate shill to an independent, sexually confident adult. Co-writing most of the album's tracks, she addressed this in "Can't Hold Us Down" -- "Call me whatever 'cause your words don't mean a thing/Guess you ain't even a man enough to handle what I sing." She also claimed creative ownership of her new look in an interview with Blender: "I may have been the naked-ass girl in the ["Dirrty"] video, but if you look at it carefully, I'm also at the forefront. I'm not just some lame chick in a rap video; I'm in the power position, in complete command of everything and everybody around me. To be totally balls-out like that is, for me, the measure of a true artist."

But as impressive as the Stripped tour was, Aguilera's current trek, showcasing last year's Back to Basics, blows it clear off the stage. Xtina divided the double-disc epic by concept. The first offers modern hip-hop takes on a classic '40s sound, while the second approaches torch-singer authenticity. Despite the sophisticated sound, as well as vintage screen-siren fashions and dazzling hairstyles, the track "Still Dirrty" claims that Aguilera "still got that freak in me/I still got the nasty in me." So true.

At her recent stop in Kansas City, Aguilera opened with "Ain't No Other Man," clearly harnessing the full power of her voice without cluttering her songs with ostentatious trills. Behind her, a 12-piece jazz orchestra bolstered the jam's hard-funk. It then brought serious swing to "Still Dirrty" and "Makes Me Wanna Pray," while eight dancers acrobatically punctuated every rhythm.

Aguilera prefaced the poignant domestic-abuse protest "Oh Mother" with details about her own troubled upbringing, supplementing her words with a video projection depicting a brute who repeatedly battered his angelic spouse. Then a carnival set dropped from the ceiling, complete with a fully functioning carousel and a confetti-shooting cannon. The contrast between tear-jerking homage and equestrian whimsy was jarring, but once Xtina's dancers started juggling flaming batons and soaring through the air via trapeze, the visual stimulation overrode any incongruities. We were all too busy scanning the stage for a possible Ferris wheel or perhaps a spangled elephant.

Amid this chaos, Aguilera vamped playfully during the brassy "Candyman" and cooed seductively over the hyper-raunch of "Nasty Naughty Boy." Interestingly enough, she skipped such randy lines as "I want to give you a little taste of the sugar below my waist," even as she and her dancers graphically molested an audience member who was strapped to a spinning knife-thrower's target.

With each new song, she sported a new costume (some glamorous period piece), saving her burlesque attire for a black-and-white video that accompanied the dusty-needle blues number "I Got Trouble." Here, she donned pasties and pawed her crotch.

Xtina closed her formal set with "Lady Marmalade," after which the entire onstage ensemble stood atop an ornately decorated mattress equipped with hydraulics. Of course, she soon returned for "Beautiful," the encore for the Stripped tour as well. Back then, however, Aguilera had been taking some catty snipes from gossip rags regarding her increasingly voluptuous figure. So the song's chorus -- "I am beautiful/No matter what they say/Words can't bring me down" -- became a defiant "FUCK OFF," especially since she performed it wearing just a white Tee and snug-fitting blue jeans. It was all about the melody, one of the finest to grace a pop ballad in years.

Aguilera ended her encore with "Fighter." And while she exercised restraint by not outfitting her dancers in headgear and boxing gloves, the prizefighting parallels remained inescapable. Big-time bouts once combined breathtaking talent with unrivaled pageantry, but now the only draws are freak shows like Mike Tyson, while the sport's technicians, relegated to casinos and pay-per-view channels, languish in obscurity.

As for Aguilera, she has matured into pop's Ali, a flashy people's champ with the skills to back up the spectacle. If not the greatest of all time, she is already modern music's preeminent can't-miss live attraction, an artist whose voice and mind-fucking visuals launch a thousand awestruck "You should've been here" text messages nightly.