What to Do This Weekend: Atticus Tour 2009 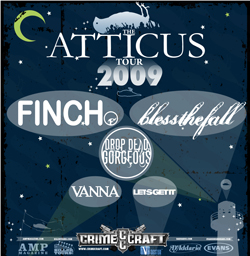 Here’s a Halloween tip: Don some black eyeliner, yank out a hair straightener and act like the bands on the annual Atticus Tour are good. It’s shocking that Finch are still around: Their screamy, gritty music wasn’t particularly fresh or interesting when their debut album came out in 2002. Drop Dead Gorgeous, a post-hardcore band from Denver that sounds a lot like Underoath, recently released The Hot N’ Heavy, which sounds like its past two albums. At least their live show is worth checking out. Meanwhile, Phoenix screamo band Blessthefall is still reeling from its singer calling it quits after the release of its debut album. Let’s Get It are also on the bill. This show is gonna be loud and heavy, especially down in the obligatory mosh pit. And we bet at least one band member will show up in a Michael Jackson costume when they play Peabody’s (2045 E. 21st St., 216.776.9999, peabodys.com) at 6:30 p.m. Saturday.Tickets: $15 advance, $17 day of show. — Emily Zemler