What To Do Tonight: KISS 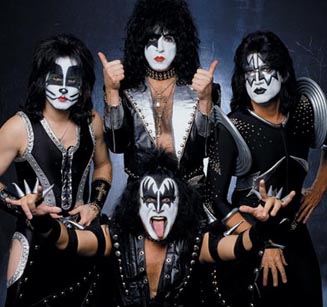 Surprised these old timers still want to rock ’n’ roll all night and party every day? Well, consider the marketing opportunities. Perhaps the only rock band to hawk caskets, Kiss have billed their latest tour as a “Kiss Alive 35” anniversary jaunt, undoubtedly necessitating an entirely new line of T-shirts, posters, programs, etc. There’s a new album coming out next week too. Sonic Boom is a three-disc, Walmart-only affair that combines new songs, re-recorded greatest hits and a DVD of a show from Argentina. The new material is mostly straight-ahead rockers like “Modern Day Delilah” and “Never Enough” — typically misogynist tunes that have a surprisingly large chunk of swagger to them. There are plenty of clunkers too. “Hot and Cold” is a sluggish number that spews clichés like “If it’s too loud, you’re too old.” And “I’m an Animal” is a piss-poor attempt to sound rugged and mean. But who cares about the music when the theatrics — including new costumes and a revamped stage — will be spectacular? Buckcherry and Eventful open at 7:30 p.m. at Quicken Loans Arena (One Center Court, 216.241.5555, theqarena.com). Tickets: $25-$128. — Niesel