What To Do Tonight: Mute Math 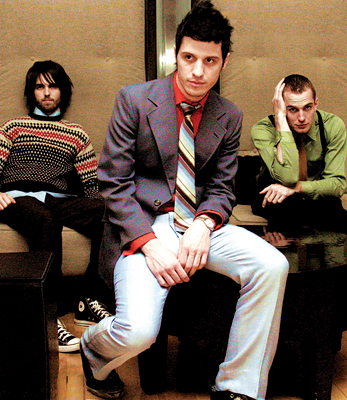 “Typical,” the lead single from Mute Math’s 2006 self-titled debut, comes barreling out of the starting gate with a hard-charging guitar hook, pauses briefly for a verse, then soars straight into rock ’n’ roll anthem territory during the chorus. Fans who’ve seen the band play live over the past few years know that singer and keytar player Paul Meany and his crew are even more ferocious onstage. Meany pogos like a meth fiend on Red Bull while drummer Darren King lays down a King Kong-size beating. Amps, keyboards and various lighting rigs are typically trashed in the process. If it sounds like a perfect fit for the Rock Band videogame, that’s because it is. But don’t count on hearing anything from the band’s recently released sophomore album, Armistice, on Rock Band any time soon. Guitarist Greg Hill’s previously beefy riffage has been trimmed to mere sinew connecting Meany’s plaintive vocals — which still bear a striking resemblance to a slightly raspier Sting — to the increasingly dance-pop oriented rhythm section. Armistice is mostly drummer/programmer King and bassist Roy Mitchell-Cárdenas’ show, and it’s a decidedly more disco experience this time around. Still, considering the pop muscle that the band flexes on tracks like “Spotlight” and “Electrify,” its concert tonight should be quite combustible. They perform with As Tall As Lions at 8 p.m. at House of Blues (308 Euclid Ave., 216.523.2583, houseofblues.com) Tickets: $20 advance, $23 day of show.
— Steve Boughton