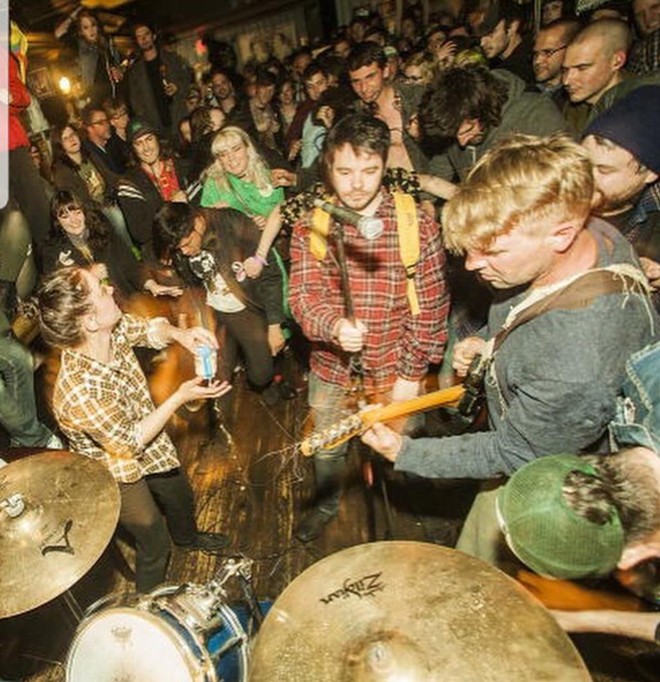 Jason Fischer
Nearly every Memorial Day weekend for the past decade or so, Paul Shlachter, owner of Now That’s Class, a Westside punk rock club that plays host to an eclectic array of concerts and special events, has produced Horriblefest, a multi-day underground music festival.

Last year, he took a year off, but the festival will return to the club this week with another eclectic mix of obscure bands.

“I got burned out on it, and I think it was good to take a year off,” says Shlachter one afternoon from the club. “People are really receptive to it this year. It’s just like anything else. You take something away, and people want it again. It’s just like a relationship.”

Here's a day-by-day guide to the event.

Schlachter: It’s a smaller show to start the festival off. Liquids is from Northwest Indiana. There’s a big underground noise/rock/punk scene there. It’s an hour outside of Chicago, and I feel like people might live there now because they can’t afford Chicago. There’s been a scene going on there for seven or eight years. They’re on Drunken Sailor, a label from England putting out bands that are sort of punk but weird and out there and lo-fi. Hairnet is from Calgary. Zip Zapp is a new Cleveland band. They’re younger kids, but they sound like prog rock almost. The opener is Rat Fucker. They’re a newer band. They have a wrestling theme.

Schlachter: It’s usually pretty wild. We’ll have an outdoor bar, and we’ll have tropical drinks out there with the barbeque. We’ll have an old Winnebago out there. There will be free live music outside. Street Gurgler is a newer band that plays punk mixed with ’70s hard rock. Oongow is a surf band.

Schlachter: Zorn is metal-ish punk. The guy dresses like a vampire and comes out of a casket. He’s very flamobyant. They get a wild crowd. Pobreza Mental is friends of mine. They’re all Puerto Rican and Spanish. They’re very energetic. It’s very aggressive punk rock. They get the crowd going insane. Negative Scanner is one of my favorite bands playing the fest. They’re from Chicago. They’re very intense post-punk, more like Wire. They’re real high energy but musical too. Donkey Bugs is really weird stuff. People from [the local group] Pleasure Leftists are in the band. It’s really strange music. I can’t even classify it.

Schlachter: This show at the Sidetrack Cafe. They let us rent the place out. The owner loves us, and it’s a good place for shows. We have bands from all over playing there. Mati is great. They are all Greek, and they sing in Greek. They’re pretty wild. [Local rockers] Kill the Hippies have been around forever. It’s a fun little show and a good interlude.

Schlachter: Warm Bodies call themselves free jazz punk. They have an intense female singer. They’re quite hyped up now. Loose Nukes is straight-up hardcore punk. They do it better than most people. We have Pharmakon, and she’s from New York. It’s experimental power electronics and completely different. She has her own big following. She’s in the middle spot there, and Sister Anne is one of the bands I’m most excited about. They sound like the Plasmatics. They’re total rock ’n’ roll. The locals playing tonight are great too.

Schlachter: This starts at 6 a.m., and that’s usually the wildest show. It’s people who might not have gone to bed. It's really fun. There’s usually an after show at an undisclosed location, typically a house or warehouse.