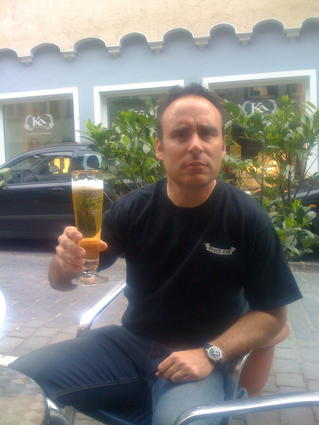 We have clearly overstayed our welcome. Brigitte and Pitch speak in the kitchen in quick bursts of harsh tones. Christoph has hit some sort of wall, and is the last one to get up. The shower process is very slow, and these people want us GONE. Gary and Christoph, somehow, have not picked up on this and move at a glacial pace. I don’t know how this is possible as there is almost a visible angry purple fog in the room.

I had showered first, and offer weak smiles to our hosts as inactivity surrounds them at all angles. Leo is slowly enjoying a coffee. Ken flips through a magazine. Christoph may be taking a bubble bath, he’s been in there so long. Heh heh heh…so…thanks again for the hospitality…ah….

Finally we exit, and despite the warning of Pitch of a “very complicated” route if we proceed in the direction the van is pointed, we head that way anyway. It turns out all we have to do is turnaround at the bottom of the hill at a very civilized intersection. Meanwhile he had wanted us to try to make a three point turn in heavy traffic on a two lane road. Maybe it was payback because we wouldn’t leave, I don’t know.

Carmen didn’t provide the one sheet of show information until we had arrived in Belgium. This is unusual, as she is very buttoned up with all the details clearly outlined. This particular one sheet has a few, shall we say, irregularities. For example, the accommodations aren’t the standard “private” or “hotel”, but instead described as “your choice”. I like the use of “your choice” as opposed to “none provided”. It’s more “glass half full”, you know? Hence, the “your choice” section of the tour has begun.