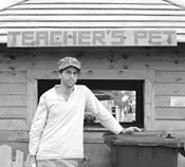 Class in session: Barman schools fellow MCs in the art of obnoxiousness.

MC Paul Barman is an Ivy League Jew, he sounds like one, and he ain't hiding it. The man is white as Jerry Seinfeld. Defiantly, courageously (foolishly? annoyingly?), he pounces on rap as his creative outlet, and the results are, for better or worse, unlike any other hip-hop album you'll hear this year.

You think Eminem had it bad breaking in? At least he shared a common class with his peers. Barman graduated from Brown University in 1997 and soon thereafter dropped a debut single with the unapologetically un-ghetto title "Postgraduate Work." Producer Prince Paul, who will always be best known for manning the boards on De La Soul's classic Three Feet High and Rising, liked the single, contacted Barman, and they created a follow-up EP, "It's Very Stimulating." The disc was well received, probably because of the clarity of Barman's vision. And from that point, thanks to guts, style, and an incredibly distinctive voice, he gradually worked his way into the upper echelon of the American hip-hop underground.

After a five-year hiatus, Barman recently released his debut full-length, Paullelujah! You'll either love it or want to hunt Barman down and kill him, depending on how open you are to a brilliant hip-hop oddity -- and how rigid your definition of "keepin' it real" is. The album is fun as hell -- one of the best nonstop party records since Three Feet (even though Prince Paul produced only one of Paullelujah!'s tracks). Barman sets songs in an anarchist bookstore and at a National Organization for Women rally (and proceeds to have nasty sex with "Genevieve," who "has a whole henna sleeve that says, 'Who cares what men achieve?' Under her arm, America's Wrong, by Erica Jong"). He visits high schools and a Nazi death camp ("Gramps made a damn nice lampshade. They stretched his tanned flesh out like a Band-Aid without the sterile pad. As feral lad, did you feel in peril, Dad?").

In these places, Barman lets loose, his rhymes tumbling down the hills like a slalom skier in the middle of a career-ending crash. But within these brilliant catastrophes are angles and bends and twists and sprains that will pass you by on first, second, even third listen -- no matter how smart you think you are. At one point, Barman even threatens to start rhyming in Morse code.

Of the 13 songs on Paullelujah!, one in particular -- "Old Paul" -- captures the album's essence. It takes the form of an imagined autobiographical obituary: "I'm gonna take a lackadaisical ride on my back-in-the-day cycle," Barman announces, overpronouncing every syllable. "Old Paul gave rap a cold call. The Caucasoid had the whole block annoyed. It took big gilded gold balls to smile at terror and trial and error." He then ponders the charge that's been levied against him -- that he's ripping off a culture: "Is it 'cause I go for the laugh? Because I'm not from the Ave.? Because I target fans you wish you didn't have? Had I made a mockery of a culture like the Choco-Taco? Was I to rap what France was to Morocco?" Then, at the height of Old Paul's imagined career, he stops, retires: "I pressed control-Q in full view of my old crew. Instead of hustling cameos and picking out Grammy clothes, I make stuffed animals while my family grows."

New Yorker subscribers are gonna be giggling nonstop throughout, if they can stomach the smut (of which there is much -- don't let this anywhere near a 12-year-old boy; it will become his favorite record ever). Barman name-drops the following people on Paullelujah!: Garrison Keillor, Ruth Bader Ginsburg, Woodward and Bernstein, the Keebler elf, Margaret Sanger (including the classic line "more anger than Margaret Sanger sitting on a bloody coat hanger"), Quetzalcoatl, Don Quixote, Alexander Calder, Jean Dubuffet, and, in the gloriously bawdy (OK, totally nasty) "Cock Mobster," Maxine Hong Kingston, Cynthia Ozick, Laetitia Casta, and Sigourney Weaver, all of whom Barman fantasizes about during the course of the song.

Yes, anyone can name-drop. And aren't we all so impressed by how well-read the MC is? But, as in humor, timing is everything in rap, and Barman possesses a crazy control, simultaneously working to maintain a rhythm and a comedic tension. When he succeeds, the deft merger of his verbal style -- always a tad clumsy and white -- and his punch lines are laugh-out-loud funny. He's as quick as Don Rickles and gets into verbal pickles just so he can unstick himself. Barman's digging in some very different cultural crates than your average MC is, and his explorations -- although buried in a lot of giggly sex talk -- are important in the progression of hip-hop.

Ultimately, though, who cares how clever and smart MC Paul Barman thinks he is? If the rap ain't funky, the thing ain't gonna fly. Luckily, Paullelujah! is strong, sturdy, and built to carry a dance floor. It's a bouncy, happy, poppy record for the most part, and it stands far removed from some of Barman's dirtier-sounding peers in the Anticon and Def Jux camps, with its woodwind samples, horn-section blasts, bouncy carnival brass sections, and Spanish guitar lines -- all of which loop in odd but ultimately satisfying ways. Besides, if you're not down with the style, you can stick with the words. Says Barman: "If I had any rhythm maybe you'd finally faint; the way I communicate would make a dang eunuch mate."