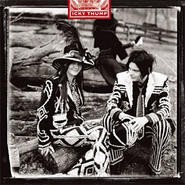 On Icky Thump, the stripped-down garage blues that made the White Stripes the most imaginative revivalists of their generation has been replaced by half-assed, half-hearted prog. Thump's two blues tunes, "300 M.P.H. Torrential Outpour Blues" and "Catch Hell Blues," have such an awkward gait, they actually feel like they're played by obligated divorcées. It sounds as if Jack wrote these songs in five minutes and Meg learned them in three.

Unless they're saving the army of Candy Cane Children from a deficiency of Bad Company, tunes like "You Don't Know What Love Is (You Just Do What You're Told)" and "Effect & Cause" don't reinvent the wheel; they just hastily retread it. Owing much to young Ozzy ("Icky Thump"), old Ozzy ("Little Cream Soda"), and Humble Pie ("I'm Slowly Turning Into You"), the rest of Thump's character seems just as lazily borrowed.

This leaves "Rag and Bone," a half-song/half-skit wherein Meg and Jack talk about ransacking a cluttered room in a mansion. Jack admits the motive: "Make some money out of 'em, at least!" "This fits me perfect," Meg answers in a greedy whisper. 'Nuff said.