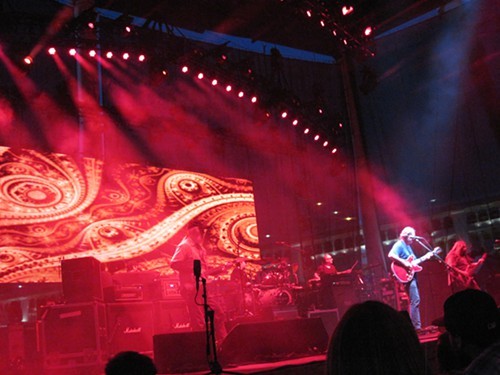 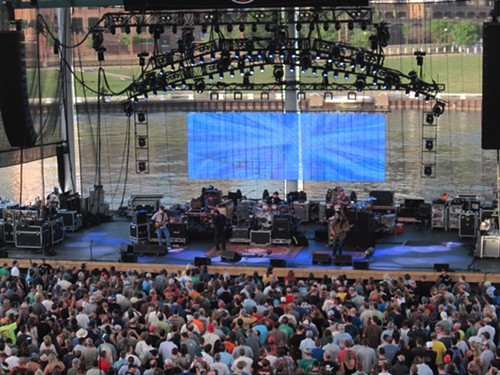 It began with a quick shot of Maker's Mark at the Harbor Inn on Main Avenue. It was Thursday evening. There was some pretty considerable debate around the bar as to when precisely Widespread Panic would take the stage at Nautica. Inevitably, the band began with plenty of people still hanging around the street outside. The lots between us and the venue were rife with pre-show mania.

Widespread Panic hadn't played Cleveland in years. The crowd was not at all at capacity, but we were all ravenous nonetheless.

During "Tie Your Shoes," a massive freighter passed behind the stage, and guys were heading out to the deck and tuning in to the budding majesty flowing among the crowd. It was a really great sight. In fact, as the night went on, plenty of small boats were pulling up close to the stage and relaxing 'neath the music. Those sorts of things are fairly omnipresent at Nautica shows (one of the really great aspects of the venue that out-of-towners are always quick to point out), but there was something even more special in the air as Jimmy Herring unleashed solo after solo, just leveling the place and likely leaving curious boaters lost at sea for a time.

And Dave Schools - oh me, oh my. He was droppin' bombs left and right. During the second set, he particularly kicked things into the stratosphere during "One Kind Favor" -> "Stop / Go" (a top-notch combo that slipped sweetly into the finale of the show, including a bitchin' touch-down on "Astronomy Domine" and an awesome "Proving Ground."

Looking back at everything, the show was crafted so well. The setlist is really terrific, save for a few oddly placed tunes like a second set-closing "Flicker," which remains one of my favorite recent Panic songs but still feels iffy in such a prominent placement. But elsewhere, the jamming and transitions were excellent. Mirroring the evening's blissful weather and the delightfully scenic environs along the river, Panic manifested as beauty all night long.

The encore left us with "North," which put some fine punctuation on a really dazzling show. The last time the band was remotely near Cleveland was in October 2011, when they dropped a truly fever-pitch show in Akron. Thursday's gig in Cleveland proper had more of a contemplative mood throughout a majority of the evening.