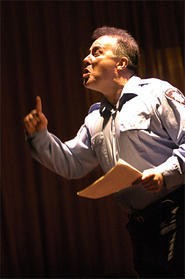 "We signed Skeletonwitch because we just really liked the sound the band had going," says Prosthetic's Bob Deutsch. "Skeletonwitch combines old-school thrash with death-black metal vocals and genuinely original songs. They play at breakneck speeds, like beer, and are hard workers. That's what really makes them stand out."

The label and band declined to specify how many records the worldwide deal is for, but emphasized that it's a long-term arrangement. The quintet will record its second album in Virginia in June, with producer Cory Smoot, the GWAR guitarist whose production credits include Municipal Waste. The disc is due in late 2007, and the band will spend the year on the road.

Skeletonwitch formed in Columbus in 2003 and moved to Cleveland in July 2006, following drummer Derrick Nau to the city, where he studies biomedical illustration at the Cleveland Institute of Art. They've since become a fixture on metal bills at the Beachland and Jigsaw.

"One of the main reasons is how much attention they pay to the bands on their roster," says Hedrick about Prosthetic. "They understand where we're coming from aesthetically and let us do our thing. We have complete creative control. Also, if we need something, we just go directly to the label's owner. That's a great feeling, and we're very excited to work with them."

· Scott Eakin passed away Tuesday, February 20, of a heart attack. He was 38. Eakin's long history on the scene stretched back to the late '70s. He played guitar, bass, and drums with underground punk groups and flagship rock bands, including Stepsister, the Dark, the Guns, No Parole, and Knifedance. "Scott left behind a musical legacy and was loved, respected, and admired," says his brother, Tom "Tom Dark" Eakin. Dark is planning a Guns compilation some time in the next year.

· Regional television show Random Acts of Music will film and tape the Rachel Roberts and Chittlin show Tuesday, March 6, at the Happy Dog (5801 Detroit Avenue). Visit www.randomactsofmusic.tv for footage and streaming audio of acts that include Diesel and Neil Jacobs.

· The Funky Frog (7865 Plains Road, Mentor) will launch a battle of the bands Wednesday, March 7. The winner will receive $1,000 and will open for a national band. Visit www.funkyfroglive.com for details.