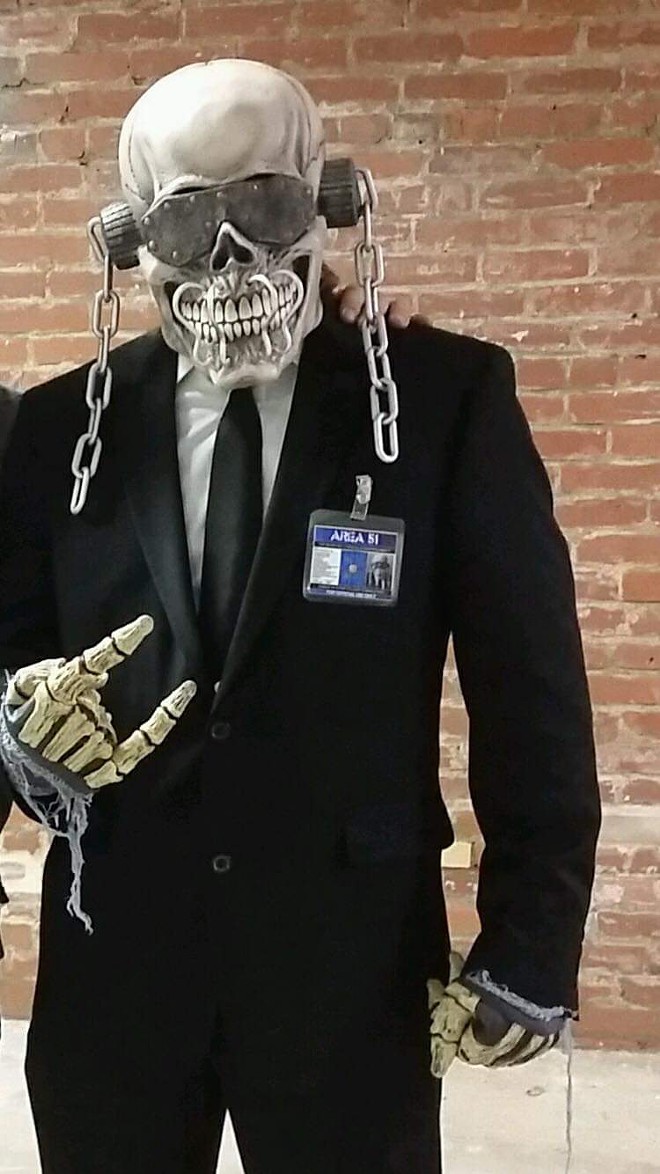 Courtesy of Bill Peters
Update: Megadeth mascot Vic Rattlehead (pictured) — a real person who lives in Parma in case you were wondering — will co-host the upcoming Cleveland Metal Holiday concert that takes place on Dec. 14 at the Beachland. Rattlehead, who doesn't speak, started appearing with Megadeth in 2010. For the benefit concert's raffle, he's put together a framed collage of photos and a quote from Megadeth's Dave Ellefson plus "a couple trinkets." He'll share MC duties with Chris Emig, the singer in the local metal band Olathia.

In addition, Olathia has recorded "We Are the Storm," an original tune about the annual event. The single will be sold exclusively at the concert.

"The Cleveland Metal Holiday Show is entering its 11th year, and the anticipation and excitement that surrounds this event is just incredible," says Olathia singer Chris Emig. "It’s become a top metal rally that benefits worthy causes, while also promoting the music scene and giving a free night of entertainment to the fans. You’ll find the venue packed with all ages, and huge amounts of generosity being shown with food, pet supplies and money donations for the causes. A few beer donations seem to get tossed my way through the night as well. We wanted to write a song about the event and to thank the people who support it and who make it happen. They come together every year, many in person and many donating from afar, but without fail they hit it hard, and their craziness and kindness carries on to make a difference! This anthem song, 'We Are The Storm,' is for them and for all who feel the excitement with engines burning while thunder strikes!"

Original Post 9/20/2019: A terrific benefit concert that occurs during the holiday season each year, WJCU's 11th annual Cleveland Metal Holiday Show will take place on Saturday, Dec. 14 at the Beachland Ballroom and Tavern.

The local glam metal act Priscilla, who had a commercial radio hit on WMMS back in 1989 with "Wake Up the Neighborhood" and had three songs chart on the popular heavy metal satellite radio station Z-Rock, will reunite to perform at the event.

"Amazing how quickly 30 years flies by," says Priscilla vocalist Brad Slitt in a press release. "On Dec. 16, 1989, during one of the greatest periods for hard rock and heavy metal in this country, Priscilla made our debut to a packed house at the old Peabody's Downunder in the Flats, and we couldn't think of any better place than Bill Peters' Holiday Benefit Show that we would rather perform for our 30-year reunion, almost to the day. We're going to party like it's 1989!"

Chris Emig will return as the show's MC and also perform with her band Olathia.

"Our charity event showcases a diverse musical lineup of local heavy metal talent," says event organizer Bill Peters, host of the long-running WJCU program Metal on Metal. "I'd like to thank all the bands for donating their time to play our benefit this year."

“Please make a difference and support the good causes of this benefit show,” adds event co-sponsor Iron Ingo Stührenberg, a Germany-based music critic. “Enjoy a great night with rockin´ live music and meet up friends and good people who are also giving a little bit to help a lot! To say it with the wise words of Winston Churchill: 'We make a living by what we get, but we make a life by what we give.'"

Fans attending the concert should bring food and cash donations for the Greater Cleveland Food Bank, Friends of the Cleveland Kennel and the Alzheimer's Association. Peters' wife Wendy was recently diagnosed with the fatal disease for which there’s currently no cure, and Peters has added the Alzheimer's Association to the list of charities that will receive proceeds from the concert.