WJCU’s Virtual Blizzard Bash Fundraiser to Kick Off on Friday 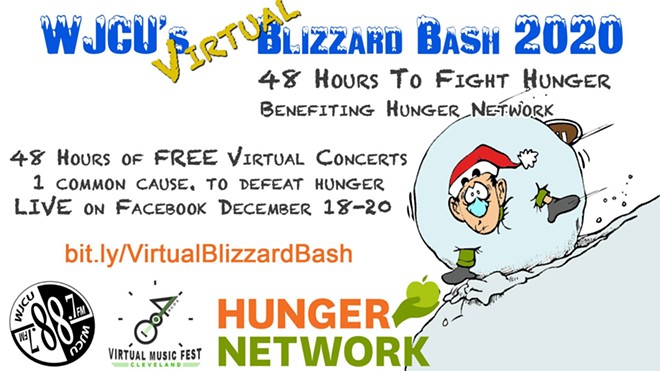 WJCU and 48 Hour Virtual Music Fest have teamed up for WJCU’s annual fundraiser, Blizzard Bash: 48 Hours to Fight Hunger. The event kicks off at 8:45 p.m. on Friday and runs for 48 consecutive hours.

Created by musician and open mic host Meg Stepka, 48 Hour Virtual Music Fest, which is now in its tenth month, began as an online event to give local performers an opportunity to continue their profession during the pandemic. It also benefits programs and charities in need of financial support.

After Blizzard Bash concludes, NEORocks! will kick off its annual Holiday Radio Show on 88.7 FM. It'll feature recorded holiday songs from artists participating in a virtual livestream fest. Proceeds benefit Hunger Network, and the event takes place from 8 to 10 p.m. on Monday.

Since the onset of COVID, Hunger Network has provided over 2.2 million meals — a 21 percent increase compared to the same time last year. As one of the largest emergency food distributors in Greater Cleveland, Hunger Network serves over 40,000 people each month.

“Locally, many families are struggling [and that's] especially [true] because of the pandemic” says NEORocks! co-host Jason Meyers in a press release. “The work Hunger Network is doing to change that is incredibly valuable, and we want to support their cause by bringing the community together with good music.”

“For over 40 years, Hunger Network has had the honor of working with so many people to build community-powered solutions in the fight against hunger and food waste,” says Julie Johnson, Hunger Network CEO. “We can’t wait to celebrate our Cleveland community and raise funds to support our mission at WJCU’s Virtual Blizzard Bash.”

Viewing the Blizzard Bash concert is free, and organizers will provide links so that you can donate to Hunger Network.