World in a Room Reunites 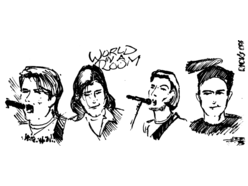 World in a Room was one of the most popular of Cleveland’s wave of poppy alternative bands in the '90s, with a surging, melodic sound that drew from all the usual sources of that era: R.E.M., the Smiths, Depeche Mode, U2 etc.

The quartet — vocalist and rhythm guitarist Jason Kilbey Smith, lead guitarist Kevin Bang, bassist Tim Brennan and drummer Don Lisy — never got the respect they deserved from local media, but they sure got it from audiences and easily outdrew most of the bands that local music mavens were hyping. They were especially beloved by the college crowd — John Carroll co-eds packed the Grog Shop every time they played.

In their four years together in the mid ’90s, they released a pair of well-executed and enjoyable CDs, Dance on the Stones and Mood Circus. The group is now making music again, taking it one step at a time and seeing where it leads. They’ll be doing a big reunion/welcome back show at the Grog Shop on June 13, with tickets already on sale and according to the band, selling briskly.

If you’re an old fan and want to be sure you get into a show that’s likely to be sold out, you can buy tickets from Brennan for $8 advance (they’ll be $10 at the door, if any remain). You can send a check to him at 5562 Strathaven Dr., Highland Hts., OH 44143 or e-mail him at [email protected] to pay by PayPal. —Anastasia Pantsios