Years after he gave up on rock music, Bob Mould plugs back in 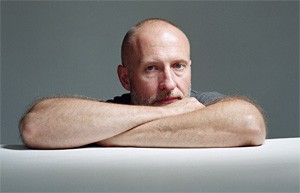 Bob Mould could use a shorter table or a bigger chair.

Post-punk icon Bob Mould took a surprise left turn a few years back, making experimental electronic dance music that was genres away from the blistering three-chord hardcore pop he played in Hüsker Dü. On his new album, District Line, Mould plugs back in.

Formed in 1979, the Minneapolis-based Hüsker Dü put a whole new spin on the power-trio attack, writing and performing amphetamine-fueled blitzkrieg assaults. Over the next eight years, the group became the first real post-hardcore band — eventually moving on to ambitious concept albums like 1984's landmark Zen Arcade, which juxtaposed long guitar freak-outs, primal howls, acoustic tunes, and piano instrumentals, mapping territory for many artists to come. "I know where [the speed and rage] came from," says Mould, "but I never look back at it."

Hüsker Dü was one of the first bands of its class — which included such college-rock luminaries as R.E.M. and the Replacements — to make the leap from an underground label (SST) to a major one (Warner Bros.). Mould — an upstate-New York native — quit the group in 1988. He set out on his own with strong solo records like Workbook and Black Sheets of Rain. Then he formed another loud rock trio, Sugar, which hit gold during the alt-rock boom of the early '90s. Then he stopped creating noise records altogether.

"I made a pretty conscious effort in [the late '90s] to get away from the guitar stuff," says Mould. "I'd been doing that for 20 years, and I felt like it had gotten pretty stale — both as a way of playing music and as a way to listen to music. The late '90s was a lot of people sort of emulating things that had happened in the early '90s. It was all very corporate and all very boring."

By 1998, Mould was living in New York City. He announced his homosexuality and began exploring the overlapping worlds of gay nightspots and dance clubs. Their music was new to the former guitar hero, and he was immediately hooked by big-room trance and techno DJs like Paul van Dyk and Sasha & Digweed. Back in the day, Mould had formed Hüsker Dü as a feedback-drenched reaction to disco's monotony; modern electronica, however, was dance music he could get behind. So he made a record that embraced the culture: 2002's Modulate.

"[Dance music] was more punk rock than anything that was going on in punk rock and alternative at the time," says Mould. "Musically, they weren't connected, but I think raves had a lot more to do with punk rock than Hot Topic. Culturally, it was trying to accomplish the same things that the early '80s hardcore scene was: finding an obscure place that you could play a party for cheap."

For the past five years, Mould has hosted monthly club gigs under the moniker Blowoff around his new home base of Washington, D.C. He also recorded a dance record as Blowoff with Deep Dish's Richard Morel, a noted remixer who's worked with New Order and Mariah Carey. During this time, Mould also performed as LoudBomb, which is an anagram of his name.

Mould says his musical extremes have much in common: Whether it's unstrained hardcore slamming or big-beat house, both demand physical reactions from audiences. "In early hardcore punk, the dancing and the ritual were different, but [the punks are] a bunch of guys dancing, either way you look at it," he says. "There are [dance] pieces that have [hardcore's] kind of density. I don't know that they have the speed or aggression, but a lot of it has big, dense layers of sounds, which are things that I've always enjoyed."

As new-wave revivalists began popping up on both sides of the Atlantic, Mould eventually eased back into rock music, finding a bridge between dance and indie grooves. He even remixed Interpol's "Length of Love." "I think the boundaries between guitar rock and dance music and electronica have gotten incredibly blurred in the past seven years," says Mould. "And it's probably for the best."

Mould wrote and recorded Modulate with samplers and sequencers. Body of Song, from 2005, was a bit more rock-oriented. District Line — which is on the ultra-hip Anti- label, home to Tom Waits and Neko Case — brings together all the elements of Mould's long career. Opener "Stupid Now" starts soft before erupting into a loud guitar-and-drums chorus. The unplugged "Old Highs, New Lows" borrows crisp Pete Townshend-style acoustic tones and layers them over subtle piano plunks and electronic accents. It all culminates in "Shelter Me," a full-on fusion of 4/4 dance beats, processed vocals, and wounded confessions.

District Line is a personal album; politics are in the past and on the periphery. "Put down the cell phone/And try to be with me," he sings in "Again and Again." Says Mould: "This record probably feels a little more comfortable to people because it's composed on guitars."

That's good news to longtime fans. So is the fact that some of Hüsker Dü's most transcendent tunes — "Celebrated Summer," "Hardly Getting Over It," "I Apologize," and "Could You Be the One?" among them — are back on his career-spanning concert set list.

Yet Mould says he isn't the least bit nostalgic for the old days. His angry-young-man screeds just aren't something he can relate to anymore. He's moved on — though he still recognizes a classic when he hears one. "I've got a real healthy relationship with the songs that I write that I like," he says. "The ones that I think stand the test of time, and the ones that are still valid emotionally for the playbook right now."