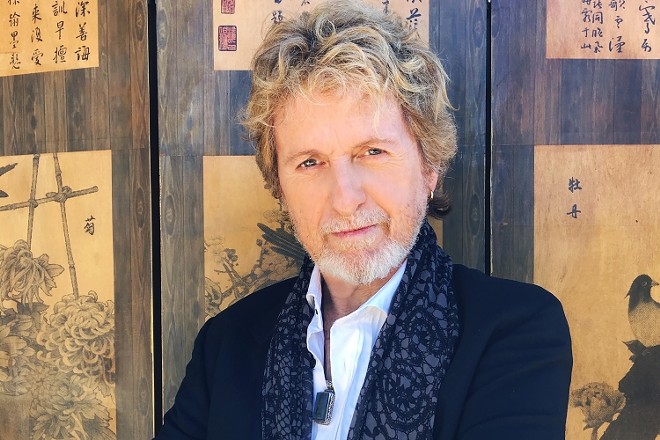 Deborah Anderson
Jon Anderson.
YES singer Jon Anderson clearly remembers his first encounter with School of Rock founder Paul Green. YES was playing at the Spectrum in Philadelphia in the early 2000s, and when Anderson arrived backstage after the gig, some 15 kids wearing School of Rock T-shirts approached him. Green introduced himself as their chaperone.

“He said he and the kids played really good music and loved Zappa and YES,” says Anderson in a recent phone interview. He was just outside of Philadelphia rehearsing for the tour that brings Jon Anderson and the Paul Green Rock Academy to the Kent Stage on Friday, July 22. “He asked if I would be interesting in working with them. I said, ‘No, I don’t think so.”

Undeterred, Green sent Anderson a cassette of the kids performing the YES track “Heart of the Sunrise,” and Anderson changed his mind.

“It blew my mind,” Anderson says of the band's rendition. “If there’s any piece of YES music that’s not easy to play, it’s ‘Heart of the Sunrise.’ He asked me sing it with them at a show in L.A., and we’ve worked together ever since.”

For the current tour pairing the Paul Green Rock Academy and Anderson, the group will celebrate the 50th anniversary of the YES album Close to the Edge.

“I suggested we do Close to the Edge, and Paul [Green] said the group had already been rehearsing it,” says Anderson. “We’ve been doing it and it’s been lovely. We toured in the spring and did the whole album. The musicians are wonderful to be with. I don’t know what it is. In my lifetime, to think about working with these kids on songs we recorded 50 years ago, it’s very refreshing for me. You get used to playing a YES tour where we would just play the latest album and the classics.”

Famously, Close to the Edge represents the last album YES would record with drummer Bill Bruford, who left the band shortly after the recording sessions ended.

“To be honest, I think he and Chris [Squire] didn’t work together as well as they should have,” says Anderson when asked about Bruford’s depature. “Chris was very dominant and Bill was very dominant too. We finished the album, and two weeks later, Bill called me to say he was leaving the band. I started thinking, ‘Well, what’s the matter with our band?' I kept up a friendship with Bill over the years, and we had a great time at the Hall of Fame Inductions.”

Anderson says that Herman Hesse’s Siddhartha became an inspiration for lyrical content simply because he was reading so much at that time in his life.

Anderson describes the lyrics of “And You and I,” a heady three-part tune that has a folk feel to it, as “very aggressive.”

“Siberian Khatru," another Close to the Edge highlight, features a brittle guitar riff and echoing vocals that sparkle and fade.

“That was a song we recorded in the space of a day,” says Anderson when asked about the tune. “I went in with a basic idea. It’s about the power of nature. Even in Siberia, things go crazy. That was the metaphor. No matter what, things can go crazy. But if you hang in there, everything will be okay.”

After the Paul Green Academy tour wraps, Anderson says he’ll continue to celebrate the YES legacy and hit the road with the Band Geeks.

“They’re YES fanatics,” says Anderson. “They sound exactly like YES. I can’t believe it. You can take the recording from the studio 1974 and implant them in it. They’re really good guys. We will tour together with the epics and the classics. I’m still writing new music too. Years and years ago, I did a solo album called Olias of Sunhillow. Ten years ago, my son asked me to do Son of Olias. I’ve been working on that for ten years. I just finished it last month. It’s nearly four hours of music. I’m not sure how to get it into the world, but I’ll figure it out.”