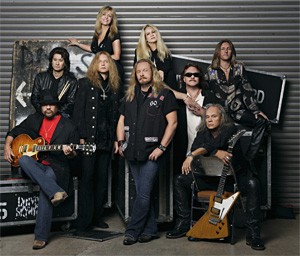 Skynyrd: "What song is it you wanna hear? Really? 'Free Bird'? I guess we can play that."

The Rowdy Frynds Tour, featuring Lynyrd Skynyrd and Hank Williams Jr., is mud-boggin' across the U.S. this spring. The crew will most likely leave every single venue smelling like Jack Daniel's and looking like one of Britney Spears' cousins — a little rough around the edges, spiked with a hint of shameless backwoods nostalgia.

Last year, the first Rowdy Frynds tour grossed $10.5 million. According to its press office, that figure places the road show in 2007's Top 10. Hype check: Rowdy Frynds is not listed on Billboard's Top 10 list, where Rascal Flatts checks in at No. 10 with $41.6 million.

But never mind all that. In an era when country music pretty much sounds like smoothed-out southern rock and rockers like the Drive-By Truckers try to recreate the redneck archetype and myth, seeing a bunch of authentic good ol' boys do it up like it's 1976 oughta be on the to-do list of every rural-culture aficionado.

We've accumulated a mass of facts and a dash of ornery Yankee bias (full disclosure: My great-great-grandfather helped the Union burn down Atlanta — for real) to help provide perspective and to prepare you and your own rowdy frynds for this week's concert.

1. Just say Skynyrd (Skin-Nerd). A gang of mop-top teens from Jacksonville, Florida, formed a band in 1964, finally hitting on a potent mix of hard rock, country, and blues sometime around 1970. Some things you probably know: Lynyrd Skynyrd took its name from a longhair-hating gym teacher its members knew in high school; a plane crash killed singer Ronnie Van Zant and guitarist Steve Gaines in 1977; and the only original guys in the group these days are guitarist Gary Rossington and keyboard player Billy Powell. Ronnie's younger brother Johnny has fronted the band since its 1987 reformation.

2. Neil Young liked both Skynyrd and "Sweet Home Alabama," the song that called out Young for blasting southern men. There really was no beef between the guys. Just ask the Drive-By Truckers, whose Southern Rock Opera includes this putting-it-all-to-rest line: "Skynyrd was a bunch of Neil Young fans, and Neil, he loved that song/So he wrote 'Powderfinger' for Skynyrd to record/But Ronnie ended up singing 'Sweet Home Alabama' to the lord/And Neil helped carry Ronnie in his casket to the ground/And to my way of thinking, us southern men need both of them around." All true — except for the part about Young being a pallbearer at Van Zant's funeral. He wasn't.

3. Skynyrd will play "Free Bird." Promise. You don't have to yell for it. Southern rock's answer to monstrously long epics like "Stairway to Heaven" endures, and it's not nearly as wimpy as other classic songs of its size and stature. "Free Bird" can go on for more than 15 minutes in concert, so be sure you've got a full Bic or a full charge on the cell, if that's your thing.

1. To traditional country-music fans, Williams — nickname: Bocephus — is the son of God. He made his first appearance as an artist in 1960 at the age of 11 on the stage of the Grand Ole Opry — the same Nashville institution that had banned Hank Sr. years before. Junior struggled as the Son of Hank throughout the '60s, playing his daddy's music in his daddy's long shadow. In the 1970s, he became an outlaw-country singer, working tons of southern-rock bluster into the mix.

2. Ever wonder what's up with the hat, beard, and big-ass sunglasses Williams always wears? They cover scars. "He literally fell from the mountaintop," as his bio puts it. He tumbled down a Montana mountain in 1975, breaking every bone in his face and fracturing his skull badly enough to expose his brain. Eww! It took two full years for him to recover.

3. Are you ready for some football? Bocephus has had a number of popular hits over the years — "A Country Boy Can Survive," "Family Tradition," "Whiskey Bent and Hell Bound." But thanks to its use as Monday Night Football's theme song, "All My Rowdy Friends Are Coming Over Tonight" has been permanently drilled into America's earholes.

There was a Rowdiest Frynd contest on YouTube. The winning entry features everything you'd hope for . . . and more: booze, a 4x4 rocking the Stars and Bars, a good ol' boy driving a station wagon in a cornfield, and a girl sporting a bikini top, cutoffs, and, best of all, a prominent beer belly. Yee-haw!