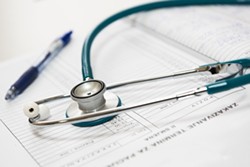 “Over time, it would become more difficult for less healthy people (including people with preexisting medical conditions) in those states to purchase insurance,” the new report states.

While the $20-trillion national budget deficit would be cut by up to $119 billion over the next decade, the net result of 23 million Americans losing insurance in that same time period is the question that now faces U.S. senators. The number of uninsured Americans would jump from 10 percent to 18 percent if AHCA provisions are approved.

U.S. Sens. Sherrod Brown and Rob Portman have both pledged not to support this bill.

"Anyone with common sense knows that paying more for less is a bad deal," Brown wrote yesterday. "The House bill will drive up costs, kick Ohioans off their insurance [and] leave folks who have asthma or cancer unable to even purchase a plan. Instead of moving forward with this bill, we need to work together to reduce costs and improve care for those we serve."

Portman has not yet offered a public statement, but a spokesperson told the Columbus Dispatch: "We will review the new analysis as we work on a different approach here in the Senate." He has cited the lack of opioid addiction service funding as a major personal obstacle for his health care vote. (Portman is overseeing a Senate subcommittee hearing today on fentanyl trafficking, which will feature testimony from Cuyahoga County Medical Examiner Thomas Gilson.)

The AHCA would further decentralize the health care market, leaving certain protections in the hands of the states. The CBO reports estimates that more than 20 percent of the U.S. population lives in states that are likely to waive consumer protections — resulting in rules that would, for instance, "allow insurers to set premiums on the basis of an individual’s health status if the person had not demonstrated continuous coverage."

Health insurance markets in those states would become "unstable" after 2020, the CBO argues, leaving older populations extremely vulnerable to skyrocketing costs. Americans beset by pre-existing conditions — and those who contract anything on the spectrum of "medical conditions," like, say, an older family member diagnosed with cancer in 2023 — may not even be able to purchase health insurance at all by that point, the CBO insists.

The nut of all of this is part of a broader crackdown on the lower classes of American society: Federal funding for Medicaid will drop by more than $800 billion, kicking out the legs of any real support system for a social institution that dates back more than 50 years and leaving lower-income Americans with one less (major) option for health care as they age. (This is coupled with another Trump budget proposal: to slash the federal nutrition assistance program — SNAP — by $192 billion. The compounding ramifications are easy to imagine.)

The House bill, of course, threaded the needle and passed on May 4 without a single Democratic vote. A vote on the Senate floor has not yet been scheduled, and Senate Majority Leader Mitch McConnell remains pessimistic about whether the body can scrounge 50 Republican votes for this bill.