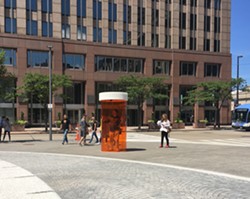 Yesterday afternoon, people strolling downtown were (naturally) drawn to a nearly-10-foot pill bottle planted in Public Square. The orange tube was plastered with information on addiction, and housed various men and women for about 15 minutes at a time.

The pill bottle was part of the city's "Know the Risks" campaign, and organized by Metrohealth and Doner advertising. Rita Andolsen, MetroHealth's communications director, and Larry DeAngelis, senior vice president at Doner, wanted to flip the narrative of typical anti-drug campaigns and highlight the root of four out of five heroin users' eventual overdoses: prescription painkillers.


“One of the things we wanted to do was to try to get at the front end of this epidemic,” said Andolsen. “There’s a lot being done on the back end, with recovery and treatment and all of that, and we thought, ‘what can we do to get on the front end and do something that’s aimed at prevention?”


Planning for the campaign began in April, and Doner said the visual depiction of prescription drugs morphing into addictions was its "creative driver."

“The thing that we uncovered was that most of the people you hear about on the news that are having an overdose or heroin problem, the great majority of them started with just a prescription from their doctor,” said DeAngelis. “So either they had a bad knee, or a bad back, or surgery or anything like that. They start on a prescription, innocently enough . . . down the road, they find they can’t shake it off.”

“If you walked into someone’s house and saw syringes, you’d know there’s a problem,” said DeAngelis. “You see pill bottles, you might just think they’re on a lot of prescriptions.”


Both Andolsen and DeAngelis said they were pleased with the public’s general reaction to the campaign. As so many people has been affected by the epidemic, passersby have shared anecdotal stories with their team.


“I think a lot of people get disheartened,” said Andolsen, “Because the epidemic is as bad as it is, and they feel helpless. But the great thing about this campaign is it’s designed so that all of us can participate.”