10 Predictions for the 2022-2023 Cavs Season from a Cleveland Homer with a Pretty Good Track Record! 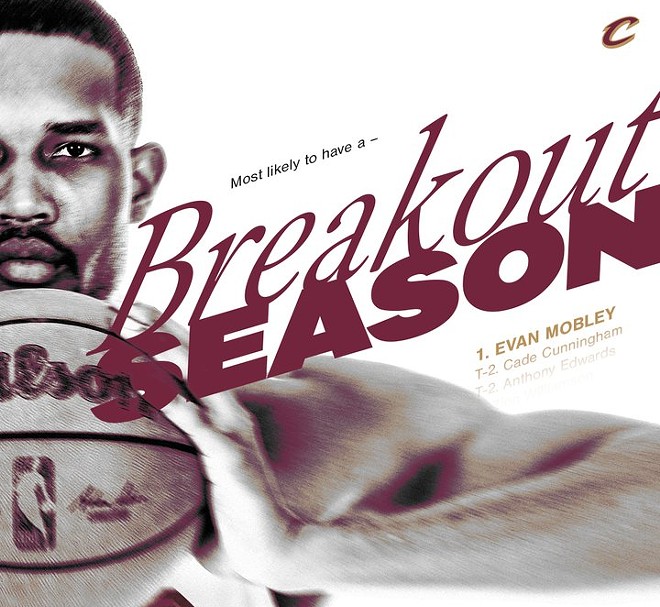 The Cleveland Cavaliers are here: to play professional basketball, yes, and to play it beautifully. But also to accept the baton from the Cleveland Guardians and prevent you, local sports fan, from having to engage in any regular or meaningful way with the scandalously unfun Browns. Much like the spunky Guardians, the Cavs have youth, exuberance and talent on their side.  (Unlike the Guardians, the Cavs adequately pay their best players and take risks to bring stars to town.)

Cavs tip off at 7:30 p.m. tomorrow against the humongous Toronto Raptors.

The future, rest assured, is almost blindingly bright for the hometown team. But so is the present! After hitting grand slams in two of its previous three drafts — Darius Garland in 2019, Evan Mobley in 2021 — Koby Altman and co. flipped their 2022 first round pick and a bushel of future picks, (plus Collin Sexton and Lauri Markkanen), for Utah Jazz All-Star guard Donovan Mitchell.

Mitchell now rounds out a thermonuclear starting line-up, featuring arguably the best offensive backcourt and best defensive frontcourt in the Eastern Conference. Anything short of the playoffs with this squad will be regarded as a catastrophe for the front office. Altman has cashed in the franchise's chips and is going for broke with the current young core. And given the team's success last year, despite rotten luck on the injury front, he was wise to do so.

The predictions below represent an annual tradition. I'm almost always too bullish on the Cavs, but try to temper my enthusiasm with realistic statistical guesswork. I continue to pray nightly for the brittle bones of Dylan Windler and am prepared to become a collector of both Ricky Rubio and Mamadi Diakite religious iconography.

Like others, I think that franchise cornerstones Darius Garland and Evan Mobley are primed for continual growth, and that great things are in store for the local fanbase. Here's what will transpire this year:

***
1) Evan Mobley should have won Rookie of the Year last year and he knows it. The league knows it too, which is why insiders are projecting him as the season's most likely breakout candidate. Many believe that, despite his youth, he will compete for Defensive Player of the Year honors. We agree.  Mobley has bulked up in the offseason and looks like a man on a mission: to personally pulverize the hopes and dreams of would-be rim attackers in the paint. Mobley has the freakish length and athleticism to guard elite wing players on the perimeter and an otherworldly poise, bordering on clairvoyance, to avoid falling for pump fakes. In short, he's a menace on the defensive end. (The Cavs coaching staff reportedly coax Mobley toward greatness each day by reminding him of his Hall-of-Fame tools, and Head Coach J.B. Bickerstaff believes he can be the best player on the court without taking the most shots). Mobley posted a nightly stat line of 15.0 points and 8.2 rebounds per game his rookie year, and we're predicting straightforward upticks in both categories, (under 20 and 10, but flirting — say 19.2 / 9.6). More importantly, he will continue to assert himself as the team's defensive anchor. He will not win DPOY, but will nab one of five slots on the NBA All-Defensive First Team.

2) Darius Garland will average better than 10 assists per game and be among the league's top two in that category. The Cavs' beloved point guard was already among the league's headiest and most willing passers last year, racking up 8.6 per game and landing among the league's top six.  Only four players dished out more than 9 assists per game last year, and two of them, Trae Young and Dejounte Murray, now play for the same team, the mercurial, screeching Hawks of Atlanta. This is all to say that an assist title is absolutely within Garland's reach.  Even though ten assists per game is a very high bar, (only Professor Andre Miller has eclipsed it over the course of a full season in a Cavs uniform), we believe DG is among the best true point guards in the NBA, worth every penny of his max contract extension, and see multiple assist titles in his future. This is the season he overtakes grandpas Chris Paul and James Harden. (We regard Indiana's Tyrese Haliburton and Dallas wunderkind Luka Doncic as Garland's main contenders for the passing crown.)

3.b) Mitchell will effortlessly lead the Cavs in scoring and will post the highest per-game scoring average by any player not named LeBron James in Cavaliers history. That distinction is currently held by Kyrie Irving, who averaged 25.2 points per game in 2016-2017. Mitchell will surpass it by a hair.

4) The Cavs will have three players on the All-Star Team: Donovan Mitchell, Darius Garland and Evan Mobley.  (Jarrett Allen will continue to be rock solid, but won't have the statistical production to earn a repeat trip, especially in an Eastern Conference overflowing with high-end talent.)

5) Mobley and Allen will each record more than 100 total blocks. That may sound pedestrian for what is regarded as the best interior defensive duo in the league, but no two Cavaliers have recorded 100 or more blocks in the same season since Larry Nance and Hot Rod Williams did it in 1992-1993. (Last year, Mobley and Allen swatted 115 and 75 blocks respectively. ) If both avoid injuries, this could be easy money.

6) Isaac Okoro will have been overhyped. The defense-first lottery pick from 2020 (post Garland, pre Mobley) will continue to improve from the perspective of offensive efficiency — he can do little else — and will still be an on-ball mosquito. That's splendid. We love Isaac and his motor, and we recognize that he's played his butt off in the preseason. But an 18/6/6 season is not incoming. (That was the breakout third-year stat line of Andre Iguodala, to whose career trajectory Okoro's has been repeatedly compared.) We just don't see an avenue for Okoro to average much more than 11 points per game, and while he defends hard, his efforts are not the kind that overwhelm a stat sheet. We  think 12/4 /3 is in the cards this year, but that strikes us as the ceiling, not the floor, even if he and Caris LeVert rotate the starting small forward gig.

7) Cedi Osman will approach folk hero status. Over the course of five seasons with the Cavs, Cedi has been an infuriating player to root for. He was meant to be the heir to LeBron James, but was desperately ill-equipped for the task. He is a streaky shooter and sometimes chaotic slasher who has found himself more than once in Coach Bickerstaff's doghouse. And yet, other than Kevin Love, he is the longest tenured Cavalier and stands to achieve significant career milestones this season. He should easily surpass Danny Ferry, Wesley Person, Daniel Gibson and J.R. Smith to move into the fifth position on the franchise leaderboard in made three-pointers, for example. Without doing anything spectacular, he could move into the Top 25 in points and Top 20 in games played. With another full season under his belt, he'll be among the giants of the franchise. This is frankly bizarre! But Cedi now understands and embraces his bench role, and we think he'll be a surprise hit on the second unit. His nightly production  — 11/3/3ish, with high-energy fast breaks and clutch threes in bunches — will suddenly appear steady, respectable, even electrifying under certain circumstances, an impression amplified by his experiments in facial hair. He will, for the first time in years, not dominate midseason trade rumors. His will be the closest equivalent to Kevin Love's warm and fuzzy season last year.

8) The new artwork will be here to stay. After multiple seasons in the artistic gutter, the Cavs slick new minimalist look with a tweaked throwback wordmark and a return to the more muted wine and gold coloring, (as opposed to ketchup and mustard), will become this era's defining uniforms. Praise be. The black alternate whips ass too. 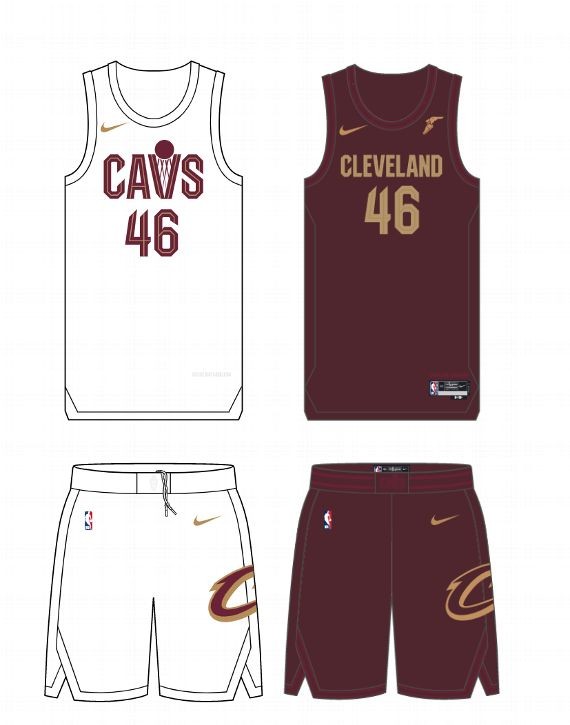 9) Mamadi Diakite, recently signed to a two-way contract, (which allows him to appear in up to 50 games for the Cavaliers), will be converted to a standard NBA contract by season's end, a conversion that will grant him playoff eligibility. He will log more regular season minutes than wily veteran backup center Robin Lopez and will be part of the Cavaliers playoff rotation. He will join Lamar Stevens — if he doesn't succeed him outright — as the team's spiritual guru and preeminent Junkyard Dog.

10) Speaking of the playoffs, the Cleveland Cavaliers will be a playoff team, earning a 4-seed in the Eastern conference. (We expect seeds 4-8 to be bedlam, a total tossup, with jostling for position in the final two weeks of the season and razor-thin margins separating all of them.) But for the purposes of having a prediction on record: The Cavs will defeat the Toronto Raptors 4-3 in a must-watch seven-game first round series that will signal both teams' ascendancy in the conference. The Cavs will then lose to the Boston Celtics 4-2 in the Eastern Conference Semis.