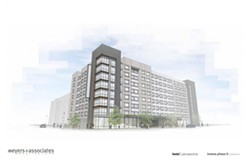 The so-called Innova Project had been stalled for months because of objections from Councilman TJ Dow. (Mark Naymik's been all over it at Cleveland.com). Dow had argued that the Cleveland Clinic and Case Western Reserve hadn’t been forthcoming with their plans. And he wanted assurances that his residents would get something out of the deal. Specifically, he wanted the Clinic, Case and the construction groups to pony up funds for a (still strictly conceptual) community resource center.

But in a press release last week, Dow signaled that he was suddenly “very excited” about the project and ready to move forward. He became satisfied that the permanent jobs and improved low-cost oral care for his constituents were justifications enough to okay the land swap.

At Monday night’s council meeting, however, he and council colleagues defended his stalling tactics. Dow said his residents were scared of the Cleveland Clinic. Jeff Johnson took to the mic and said Dow was merely standing up for the people of his ward, not “shaking down” the organizations.

Wes Finch, developer from The Finch Group, said that his company would donate nearly $500,000 for brick and mortar expenses for Dow’s resource center. Dow praised Finch, additionally, for the community benefits agreement he’d signed which aims to put community members to work.