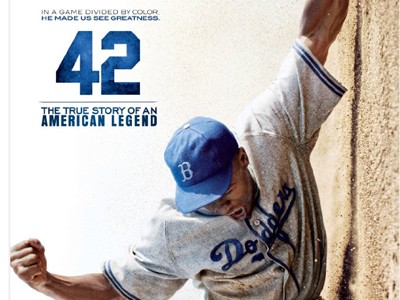 Legendary Pictures
Poster for the film 42.
Our weekly picks of the best things to do in Cleveland this weekend. Also check out our full Cleveland event calendar.

Drink and Draw with Dr. Sketchy Akron
Founded in 2005 in a dive bar in Brooklyn, Dr. Sketchy’s has now spread to more than 100 cities around the world. Dr. Sketchy Akron, a monthly drink and draw event that takes place on the second Thursday of each month at Jilly's Music Room in Akron, gives patrons the opportunity to "draw glamorous underground performers in an atmosphere of boozy conviviality." The fun begins at 7 p.m.; it costs $10 to draw. second Thursday of every month.
111 N Main St., Akron, 330-576-3757, jillysmusicroom.com.

Great Big Home + Garden Show
The Great Big Home + Garden Show returns to, Cleveland’s I-X Center this weekend with more than 400 exhibits to "inspire homeowners looking to find fresh, ideas from hundreds of experts in kitchen and bath, landscaping, décor, flooring and more." Find out more about everything from modular homes to staycation gardens. Today's hours are 10 a.m. to 8 p.m., and the show continues through Sunday. Check the I-X center website for more info.
One I-X Center Drive, 216-676-6000, ixcenter.com.

Jesus Christ Superstar
A classic musical that comes to us courtesy of Andrew Lloyd Webber and Tim Rice, Jesus Christ Superstar features classic Broadway belters such as “I Don’t Know How to Love Him” and the glorious title track. A touring production of the hit comes to Connor Palace tonight at 7:30. Check the Playhouse Square website for more info.
1615 Euclid Ave., 216-241-6000, playhousesquare.org.

Pat McGann
A standup comedian and television host from Chicago, Pat McGann created and hosted the Emmy-nominated TV show, The Chicago Stand Up Project. He likes to joke about everyday things like gardening — "We live five blocks from the grocery store so what are we doing sweating over these crops?" He performs tonight at 7 at Hilarities, where he has shows scheduled through Saturday. Consult the club's website for more info.
Hilarities Comedy Club, 2035 East Fourth St., 216-241-7425, pickwickandfrolic.com.

New Soft Shoe
Nine years ago, on what local singer-songwriter Brent Kirby calls a drunken dare, a group of Cleveland friends and musicians showed up at the Happy Dog to play a couple sets of tunes by the late, great Gram Parsons. Dubbed the New Soft Shoe, the group has been at it ever since, spreading the gospel of what it refers to as "Gram's Cosmic American Music." Anything that Parsons played, the New Soft Shoe covers. As a result, the group plays tunes from the International Submarine Band, the Byrds and Flying Burrito Brothers. It also plays songs from Parsons' solo album GP/Grievous Angel. Tonight at 8, the band performs in the Waldorf Hall at Forest City Brewery. Tickets cost $5.
2135 Columbus Rd., 216-228-9116, forestcitybrewery.com.

Rock Hall Nights: Motown
This special Rock Hall event will feature a celebration of all things Motown. The Rock Hall’s Curatorial team will bring out a collection of Stevie Wonder sunglasses, and you can request to hear your favorite Motown songs. The Foster Theatre will feature special video clips from the archives. The $21 event ticket includes touring of exhibits between 5 and 9 p.m. with activities from 6 to 8 p.m.
1100 Rock and Roll Blvd., 216-515-8444, rockhall.com.

Rod Man
While Season 8 of NBC's Last Comic Standing featured some fierce competition, Rod Man was clearly the funniest comic of the bunch. An actor and writer who starred in the 2009 film Funny People, he likes to joke about interracial relationships and talks about how "you have to be comfortable in whatever race you're put in." He performs tonight at 7:30 and 10 and tomorrow night at 6:30 and 9. Consult the venue website for more info.
2035 East Fourth St., 216-241-7425, pickwickandfrolic.com.

Walkabout Tremont
Walkabout Tremont, which takes place on the second Friday of every month from 5 to 9 p.m., showcases the best of this smart neighborhood, with art openings, extended hours at galleries and shops, restaurant and bar specials, street performers, live music, pop-up vendors, neighborhood walking tours and much more.
experiencetremont.com.

SAT 02/12
The 11th Annual Sweetheart Showcase Weekender
Tonight's Burlesco at the Goodyear Theater event will offer a "juggernaut of a show" with writer and funny man Ken Schneck serving as host. The performance begins with the Ohio Pin-Up Queen Cece Noir. Veranda L'Ni and Cleveland's Burlesque Queen and international burlesque star Bella Sin will perform, and the show also includes Jade Uzumaki, Holy Grail, Agatha Why, Joliee Blak, Dakota Cox, national recording artist Kardi Reed Diamond and many more to be announced. There will be VIP/Preferred/Reserved and General Admission seating. Proof of vaccination and masks upon entry are required., Parking is available at surface lots on Goodyear Blvd. All patrons must enter thru Market St. It all beings at 8 p.m.
1201 East Market St., Akron, goodyeartheater.com.

Remnants & Rosé
From 9 a.m. to 1 p.m. today, Granite Works Stone Design, a rebranded full-service stone supplier and fabricator in a 55,000 square foot showroom, hosts a Valentine-themed event at which guests are invited to browse our large selection of remnant stone while enjoying pastries, signature cocktails and rosé from the Thirsty Filly. Guests will have full access to a “sip and see” open house at Granite Works with Valentine decorations. Pastries from a local bakery and a full open bar, with signature cocktails, will be available.
875 Crocker Rd., Westlake, graniteworksstonedesign.com.

SUN 02/13
From Hermit Club to Hollywood: A Concert of Music by J.S. Zamecnik and Dvořák
The kickoff event of the first-ever Cleveland Silent Film Festival takes place today at 3 p.m. at the Hermit Club where Isabel Trautwein leads members of the Cleveland Orchestra in a concert celebrating the music of J.S. Zamecnik, a film music pioneer, Cleveland native and protégé of renowned Czech composer Antonín Dvořák. Rodney Sauer, music director of the Mont Alto Motion Picture Orchestra, will sit in on piano for Zamecnik’s Trio for Violin, Piano and Cello. Tickets cost $40, or $15 for students and seniors $15. There's also an option to support the festival with a $100 supporter/festival all-access pass, which covers admission for one to this concert and three films being shown from Feb. 18-20 at the Cleveland Institute of Art Cinematheque. Other festival events are free. Proof of vaccinations/booster will be checked at door; masks must be worn at all times.
1629 Dodge Court, 216-621-2325, eventbrite.com/e/from-hermit-club-to-hollywood-tickets-244453355567.

The Spits
Closing in on three decades, the Spits, as it's put in a press release, "walk the line between punk mayhem and well-honed songwriting." On the road in support of their newest record, VI, which came out last year, they play the Grog Shop tonight at 8. Recorded by Erik Nervous on cassette four track, the band’s new LP offers accessible punk rock that should translate well to the stage. Timmy's Organism and Hawk Baby open. Tickets cost $16.
2785 Euclid Heights Blvd., Cleveland Heights, 216-321-5588, grogshop.gs.