15,000 Women and Men in Cleveland Peacefully Protest New President in Solidarity with Millions Around U.S. 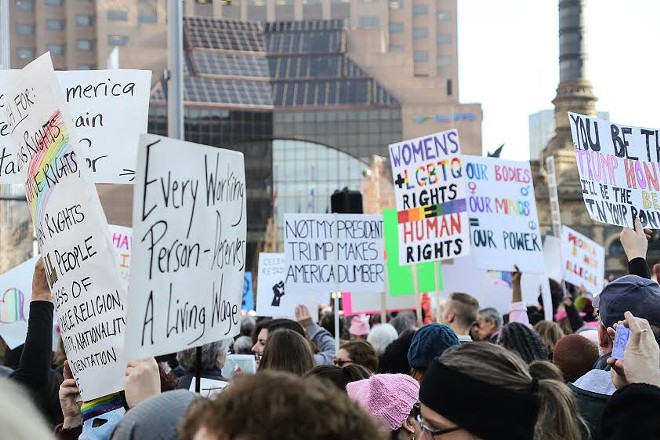 EMANUEL WALLACE
From grandmothers holding “I can’t believe I still have to protest this shit” signs to toddlers waving rainbow banners, this past Saturday’s Women’s March on Cleveland – part of an international outpouring of female-based political consciousness – was a noisy, rowdy but well-behaved expression of concern from 15,000 Northeast Ohioans (men included) about the direction of the nation under Donald Trump.

The sun was shining, the sky was blue, and pussy hats bobbed through the crowd on Public Square like cheery pink balloons. Judging by the signs, placards and chants, demonstrators’ concerns included reproductive rights, sexism, climate change, freedom of the press, and LGBTQIA freedoms, among many others. “Love Trumps Hate,” was a popular sentiment; “Fuck Trump” placards were also in ample supply.

For those standing at the edges of the pre-march crowd overflowing the square by 10 a.m., the music and speakers were essentially inaudible. But the march itself, which stepped off not long after the scheduled 11 a.m. start time, was an ebullient intergenerational occasion, especially as throngs of observers, gathered along Lakeside Avenue and on the Superior Avenue steps to the Cleveland Public Library, greeted the marchers with cheers, waves and thumbs-up signs.

During the entire event, we saw no vitriol, no counter-protesters, and virtually no security other than a circling helicopter and a few small teams of extremely polite policemen and -women on foot. (Cleveland police reported no arrests.) By 1 p.m., in typical Cleveland fashion, the protesters were wandering off and taking up positions at nearby eateries on Euclid and East Fourth Street. Hey, political action works up an appetite.