"2016: A Political Race ODDyssey" From the Cleveland Cabaret Project is an Evolving Chorus of Laughs 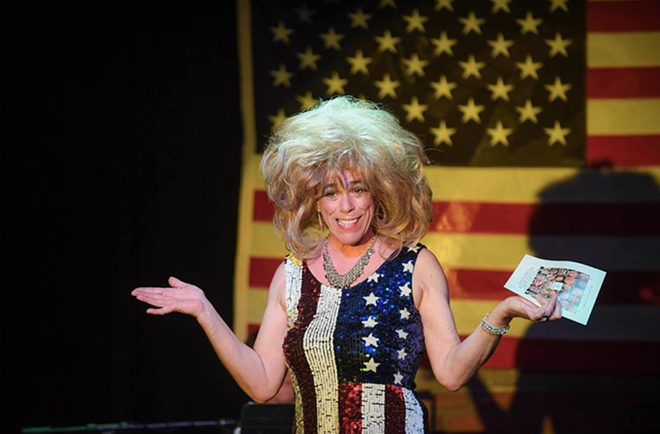 It’s either the best of times or the worst of times for anyone who wants to mount a musical political satire. With Donald Trump on one side and Hillary Clinton on the other, you have two people who have been worked over satirically ever since Spy magazine hit the streets in 1986. Of course, this all may change if Bernie manages to beat Hill, but the chances of that at this moment are slim.

That said, the Cleveland Cabaret Project has decided to celebrate the arrival of the Republican Convention here in town with a Capitol Steps-type show at Nighttown. And while it’s an on-going process of creation, with some glitches showing, this show often clicks enough to get the laughs rolling.

The bulk of the song parodies, sung to existing tunes, have been created by Rob Gibb and Bryan Fetty, who also are in the cast. But it all begins perfectly with a piece written by Lora Workman, founder and artistic director of CCP: A Chorus Line medley which has the eight performers singing, “Oh God, I need this job!” That is ideal, particularly since the Republican candidate field was like a chorus line audition from Hell.

A lot of this show is focused on that nominating process, which feels a bit dated now. But they’ll be writing new songs and trying to keep up with the ever-evolving circus act that presidential elections have become. But there are some bits that work perfectly, such as the Sound of Music-inspired “How Do You Solve a Problem Like Scalia?” And the song comparing Gov. Kasich to Don Quixote.

But others tend to fall flat. I’m not sure anyone needs to hear a Martin O’Malley-themed song, even if it is performed in drag. And roasting Hillary for her flip-flops is tone-deaf at a time when Trump contradicts himself several times a day, sometimes in the same sentence. But that clunker is saved with Hillary’s concluding rendition of “Maybe this time (I’ll win)!”

The cast features Fetty, who performs in an American flag mini-dress as Audrey and Gibb in a not particularly successful impersonation of The Donald. Another off-center impression is turned in by Carla Petroski as Sarah Palin, although she almost makes up for it through manic energy. One wishes Sheila Heyman had more to do, since her deep and raspy voice adds some fresh appeal. Tina D. Stump is a stitch as Ben Carson and rings the rafters in a gospel number, Marc Moritz and Sean Cahill exude that go-for-broke cabaret vibe, and music director Tom Bonezzi keeps it all moving.

As they say, it’s hard to do comedy and it’s really hard to do political satire, especially when everyone in the audience can probably predict what’s coming next. So hats off to the CCP troupe, and let’s hope those daggers get even sharper as the Convention nears.